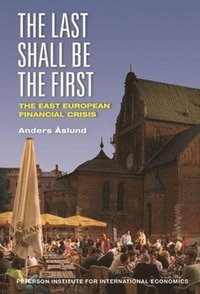 The Last Shall Be the First - The East European Financial Crisis

av Anders Aslund
Häftad Engelska, 2010-10-01
189
Köp
Spara som favorit
This book deals with the financial crisis in Eastern Europe that erupted in the fall of 2008 and abated in the spring of 2010. It concentrates on the ten new eastern members of the European Union. The causes of the crisis posed no mysteries. This was a typical credit-driven boom-and-bust cycle that led to excessive current account deficits. When global liquidity dried up, the overheated East European economies faced a sudden stop of financial inflows. What is remarkable is how well these countries have steered out of the crisis. The worst hit countries-Latvia, Lithuania, and Estonia-refused to devalue their currencies and instead pursued internal devaluations, successfully cutting public wages and expenditures. They swiftly turned large current account deficits into substantial surpluses and minimized their inflation. The political economy of crisis resolution has been equally striking. The public accepted significant hardship with minimal protests. Eastern Europe's fragmented proportional parliaments made it possible to quickly change governments when the incumbents fall short. Unstable coalition governments proved eminently able to pursued resolute anticrisis policies. They carried out impressive fiscal retrenchment without any public reaction against capitalism or globalization. The East European economies have come out leaner and more efficient. The International Monetary Fund stands out as the great victor on the international stage, having revived the old Washington consensus of a few rudimentary financial conditions, such as tenable exchange rate policy and reasonable fiscal and monetary policy, while it allowed well-governed countries larger public deficits during the crisis and offered much more financing. The European Commission entered into a successful partnership with the IMF, allowing the IMF to take the lead, while providing substantial financing. The great disappointment in the East European financial crisis has been the European Central Bank, which needs to reconsider its policies outside the eurozone to become more proactive.
Visa hela texten

Anders Aslund was a senior fellow at the Peterson Institute for International Economics from 2006 to May 2015. He examined the economic policies of Russia, Ukraine, and Eastern Europe, as well as the broader implications of economic transition. Aslund served as an economic adviser to the governments of Russia in 1991-94 and Ukraine in 1994-97.