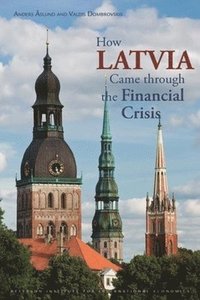 How Latvia Came Through the Financial Crisis

av Anders Aslund, Valdis Dombrovskis
Häftad Engelska, 2011-05-15
210
Köp
Spara som favorit
Latvia stands out as the East European country hardest hit by the global financial crisis; it lost approximately 25 percent of its GDP between 2008 and 2010. It was also the most overheated economy before the crisis. But in the second half of 2010, Latvia returned to economic growth. How did this happen so quickly? Current Latvian Prime Minister Valdis Dombrovskis, who shepherded Latvia through the crisis, and renowned author Anders Aslund discuss why the Latvian economy became so overheated; why an IMF and European Union stabilization program was needed; what the Latvian government did to resolve the financial crisis and why it made these choices; and what the outcome has been. This book offers a rare insider's look at how a national government responded to a global financial crisis, made tough choices, and led the country back to economic growth.
Visa hela texten

This is a fascinating story of a huge credit boom, the resulting bust and deep recession, and of an amazingly radical and brave fiscal consolidation coupled with structural reforms. The authors rightly stress that economic and political lessons of Latvian stabilization and reforms go well beyond Latvia. These lessons are especially relevant for the members of the eurozone, as Latvia successfully resisted nominal devaluation of its currency and the eurozone countries do not have this option. -- Leszek Balcerowicz, former president of the National Bank of Poland Against all odds, the Baltic countries regained their national independence twenty years ago. They did so heroically and peacefully, and they acted in the same way during the financial crisis. With little doubt, future generations of Latvians will look to Valdis Dombrovskis as the hero that salvaged their nation from this serious threat, returning his country to economic growth in only two years. In this fascinating book, Dombrovskis and Anders Aslund tell us the incredible tale of Latvia's road to recovery. -- Carl Bildt, Minister for Foreign Affairs of Sweden The open and booming Baltic countries could do little to impede the flood of capital preceding the global financial crisis and they were hit hard, most of all Latvia. This timely and engaging book tells the story of how Latvia entered the crisis and how its government took the country out of this most severe crisis. Its essence is that good policy is possible, and that sensible voters reward such policies. -- Toomas Hendrik Ilves, President of the Republic of Estonia

Anders Aslund was a senior fellow at the Peterson Institute for International Economics from 2006 to May 2015. He examined the economic policies of Russia, Ukraine, and Eastern Europe, as well as the broader implications of economic transition. Aslund served as an economic adviser to the governments of Russia in 1991-94 and Ukraine in 1994-97. He is a leading specialist on postcommunist economic transformation with more than 30 years of experience in the field. Valdis Dombrovskis has been the Prime Minister of the Republic of Latvia since March 2009. He was also Minister for Regional Development and Local Governments (November - December 2010) and Minister for Children, Family, and Integration Affairs (March - July 2009). From July 2004 to March 2009, he was member of the European Parliament and head of the Latvian delegation in ETP-ED group. From November 2002 to March 2004, Dombrovskis served as Latvia's Minister for Finance. He was a founding member of the political party New Era in February 2002. He was elected to the Latvian parliament in 2002 and 2010. He worked at the Bank of Latvia as macroeconomic specialist (1998-1999), senior economist (1999-2001) and chief economist (2001-02).