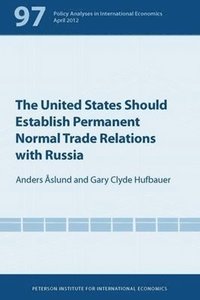 av Anders Aslund, Gary Clyde Hufbauer
Häftad Engelska, 2011-12-15
309
Köp
Spara som favorit
In the coming year, Congress is likely to face a critical vote on granting Permanent Normal Trade Relations (PNTR) to Russia in connection with its impending membership to the World Trade Organization (WTO). A "yes" on PNTR for Russia could set the tone for economic relations between the United States and Russia for the next decade, and would give the global agenda of trade and investment liberalization a fresh boost, as Russia is the last major economy to join the WTO. Congressional failure to permanently normalize trade relations would likely have broad consequences, since it would send a clear message of US skepticism that the WTO is a suitable forum for handling commercial relations between major powers. This study presents an analysis of the current US-Russia economic relations, provides estimates on the potential increase in US exports to Russia, and potential growth of two-way trade within the WTO framework. Drawing on conclusions from this analysis, and from previous work conducted by the Institute on US-Russia relations, this monograph summarizes the implications of PNTR for US producers, Russian economic growth, and bilateral commercial relations.
Visa hela texten

Anders Aslund was a senior fellow at the Peterson Institute for International Economics from 2006 to May 2015. He examined the economic policies of Russia, Ukraine, and Eastern Europe, as well as the broader implications of economic transition. Aslund served as an economic adviser to the governments of Russia in 1991-94 and Ukraine in 1994-97. He is a leading specialist on postcommunist economic transformation with more than 30 years of experience in the field. Gary Clyde Hufbauer, Reginald Jones Senior Fellow since 1992, was formerly the Maurice Greenberg Chair and Director of Studies at the Council on Foreign Relations (1996-98), the Marcus Wallenberg Professor of International Finance Diplomacy at Georgetown University (1985-92), senior fellow at the Institute (1981-85), deputy director of the International Law Institute at Georgetown University (1979-81); deputy assistant secretary for international trade and investment policy of the US Treasury (1977-79); and director of the international tax staff at the Treasury (1974-76).