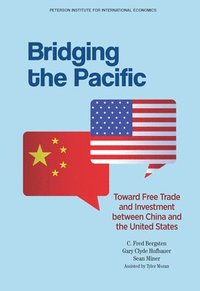 Toward Free Trade and Investment Between China and the United States

av C Fred Bergsten, Gary Clyde Hufbauer, Sean Miner
Häftad Engelska, 2014-05-15
199
Köp
Spara som favorit
Finns även som
Visa alla 1 format & utgåvor
The terrain of the world trading system is shifting as countries in Asia, Europe, and North America negotiate new trade agreements. However, none of these talks include both China and the United States, the two biggest economies in the world. In this pathbreaking study, C. Fred Bergsten, Gary Clyde Hufbauer, and Sean Miner argue that China and the United States would benefit substantially from a bilateral free trade and investment accord or from participating together in a regional agreement like the TPP. In the process, they contend, each country would also achieve progress in addressing its internal economic challenges, such as the low saving rate in the United States. Achieving greater trade and investment integration could be accomplished with one comprehensive effort or through step-by-step negotiations over key issues. The authors call on the United States to seek liberalization of China's services sector as vital to securing an agreement, and they explain that such contentious matters as cyberespionage and currency manipulation be handled through parallel negotiations rather than in the agreement itself. This is an important study of the benefits and difficulties of a complex matter that could yield dividends to the two economies and help stabilize the security and well-being of the rest of the world.
Visa hela texten

C. Fred Bergsten, senior fellow and director emeritus, was the founding director of the Peterson Institute for International Economics (formerly the Institute for International Economics) from 1981 through 2012. He is serving his second term as a member of the President's Advisory Committee for Trade Policy and Negotiations and was co-chairman of the Private Sector Advisory Group to the United States-India Trade Policy Forum, comprising the trade ministers of those two countries, during 2007-14.Gary Clyde Hufbauer, Reginald Jones Senior Fellow since 1992, was formerly the Maurice Greenberg Chair and Director of Studies at the Council on Foreign Relations (1996-98), the Marcus Wallenberg Professor of International Finance Diplomacy at Georgetown University (1985-92), senior fellow at the Institute (1981-85), deputy director of the International Law Institute at Georgetown University (1979-81); deputy assistant secretary for international trade and investment policy of the US Treasury (1977-79); and director of the international tax staff at the Treasury (1974-76).Sean Miner, China program manager and research associate, has been with the Peterson Institute since June 2013.