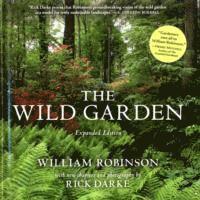 av William Robinson, Rick Darke
(1 röst)  |  Läs 1 recension
Inbunden Engelska, 2009-12-01
257
Köp
Spara som favorit
William Robinson's revolutionary book, "The Wild Garden", envisioned an authentically naturalistic approach to gardening that is more vital today than ever before. First published in 1870, "The Wild Garden" evolved through many editions and remained in print through the remainder of the author's lifetime (1838-1935). In the book, Robinson issued a forceful challenge to the prevailing style of the day, which relied upon tender plants arranged in rigidly geometrical designs. In sharp contrast, Robinson advocated for the use of hardy, locally adapted native and exotic plants arranged according to local growing conditions. Robinson's vision was inspired by his first-hand observations of natural habitats in Europe and North America, and he put his ideas into practice in his own garden at Gravetye Manor in West Sussex. "The Wild Garden" was ground-breaking and hugely influential in its day, and is stunningly relevant to twenty-first century gardeners and landscape stewards seeking to adopt sustainable design and management practices. In addition to the complete original text and illustrations from the fifth edition of 1895, this expanded edition includes new chapters and 112 color photographs by award-winning photographer and landscape consultant Rick Darke. His new material places wild gardening in modern context, underscoring Robinson's importance in the evolution of ecological design and illustrating an inspiring diversity of contemporary wild gardens. The potent combination presented here makes this new edition of a timeless classic an essential resource for all who wish to know how we have arrived at our present understanding of gardens and what opportunities lie ahead. As will be immediately clear to anyone who leafs through this book, Robinson's urgent message continues to resonate.
Visa hela texten

Will truly inspire you. Originally published in 1870, [it] remained in print for more than 50 years with a message that is just as revolutionary today. -- Doug Bergstrom Wenatchee World 20091130 Rick Darke could well be Robinson's reincarnation. -- Ailsa Francis Ottawa Citizen 20091205

William Robinson (1838-1935) emigrated from Ireland at a young age and was rapidly welcomed into the top echelons of British horticulture and botany. By 1866 he was a Fellow in the Linnean Society, sponsored by his friend Charles Darwin. Already an expert on the flora of the British Isles, he traveled the breadth of North America by train in 1870, observing regional habitats and forging lasting connections with Charles Sargent, Asa Gray, Frederick Law Olmsted, and others of their stature. Robinson was just thirty-two when he first published The Wild Garden, which has proved to be the most insightful, influential, and enduring of his many books and journals. Robinson's brilliance and enormous personal energy enabled him to become one of the most accomplished gardeners, editors, and publishers of his era, and he is often referred to as the Father of the English Flower Garden. Gravetye Manor, a sixteenth-century house which survives on over one-thousand acres in West Sussex, became his home and laboratory for developing and refining the wild garden concept. Rick Darke is a landscape design consultant, author, lecturer, and photographer based in Pennsylvania who blends art, ecology, and cultural geography in the creation and conservation of livable landscapes. His projects include scenic byways, public gardens, corporate and collegiate campuses, mixed-use conservation developments, and residential gardens. Darke served on the staff of Longwood Gardens for twenty years, and in 1998 he received the Scientific Award of the American Horticultural Society. His work has been featured in the New York Times and on National Public Radio. Darke has studied North American plants in their habitats for over three decades, and his research and lectures have taken him to Africa, Australia, Brazil, Costa Rica, Chile, Japan, New Zealand, and northern Europe. His books include The Encyclopedia of Grasses for Livable Landscapes (2007), The American Woodland Garden (2002), and In Harmony with Nature: Lessons from the Arts & Crafts Garden (2000). For further information visit www.rickdarke.com.