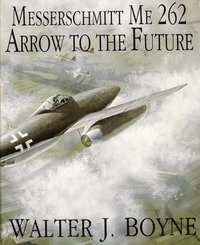 Messerschmitt Me 262: Arrow to the Future

av Walter J Boyne
Häftad Engelska, 2004-09-01
269
Köp
Spara som favorit
Specialorder (osäker tillgång). Skickas inom 11-20 vardagar.
Gratis frakt inom Sverige över 159 kr för privatpersoner.
Messerschmitt Me 262: Arrow to the Future tells the dramatic story of the Me 262\s combat career as a fascinating chain of events in which planning, luck, and even blind stupidity played important roles. Even by today\s engineering standards, magnificent is the only word to describe the effort to bring the plane\s jet engines, which eclipsed the performance of all contemporary aircraft, from the laboratory to production in an amazingly short time.\nArrow to the Futrue also tells the story of the people who flew the Me262 in combat. Their complete accounts bring their missions to life and set the plane in the historical context of the war. The German narratives are complemented by the accounts of Americans who flew against the Me 262 - for instance, the team of crack USAAF pilots known as "Watsons\s Whizzers," who literally stole a fleet of jet aircraft from German airfields at the end of the war.\nAlso described are the postwar efforts to test and preserve the Me 262. Included is a description of the efforts to obtain one of these aircraft for display at the National Air and Space Museum, and the painstaking efforts by the team at the Smithsonian\s Paul E. Garber Facility for Preservation, Restoration, and Storage to restore the Me 262 to its pristine condition.\nThis new reprint edition is lavishly illustrated with more than 100 photographs, including operational photos from World War II, color views of the cockpit, and interior and exterior shots of the restored Me 262. In addition to the striking photographs, there are expert technical drawings, cutaway illustrations, and equipment and conversion tables. \nWalter J. Boyne is the author of many books including The Smithsonian Book of Flight, The Leading Edge, Boeing B-52: A Documentary History and Phantom in Combat, as well as the novels The Wild Blue, Trophy for Eagles and Air Force Eagles.
Visa hela texten