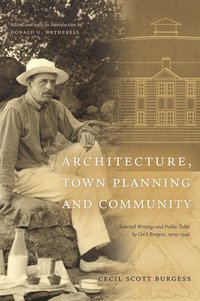 av Cecil Scott Burgess, Donald G Wetherell
Häftad Engelska, 2006-01-01
447
Köp
Spara som favorit
This collection of Burgess's public talks and writings offers a unique insight into the social and intellectual dimensions of architecture and town planning during the first half of the twentieth century. Architectural history, the impact of the Arts and Crafts and Modernist movements, the meaning of domestic architecture, and the connection of architecture and town planning to everyday life figure prominently in this collection. A contemporary of Cecil Burgess said that no one in Canada was superior in architectural scholarship. Cecil Burgess was professor of architecture and resident architect at the University of Alberta between 1913 and 1940. A similar collection of writings and talks has not been published about Canadian architecture for this period.
Visa hela texten

"The author was Professor of Architecture at the University of Alberta. He died in 1970 at the age of 101. His work, as now edited by Prof. Wetherell of the University of Calgary, is designed to guide municipal councilors, their staff and their architects, into getting the best town planning. His mantra: a community gets the architecture it deserves. It should be in every city library." Ron MacIsaac, The Lower Mainland NEWS, April 2006. "This book has value in two respects. Precisely because Burgess's ideas on architecture and planning were so mainstream, they afford insight into the outlook of many design professionals of his generation, giving the pulse of those who sought to foster civility in shaping the environment. Secondly, most of these writings were scripted for the general audience as lectures, radio addresses, or newspaper pieces. Burgess knew that without public demand, high professional objectives would never be realized. As important as this lesson remains today, the book is oriented toward specialists. Summing Up: Recommended." R. Longstreth, CHOICE, Vol. 44, No. 01, September 2006 "Cecil Burgess lived for 101 years; his influence on Canadian architecture will have a much longer life. Burgess single-handedly ran the school of architecture at the University of Alberta from 1913 to 1940. He was a methodical person who prepared for his lectures and his many professional and radio talks by writing out his speeches in full. The result is a considerable body of work available in the U of A and other archives from which this collection was drawn. The volume starts with a substantial introduction that sketches a portrait of Burgess's life and summarizes his philosophy of architecture. This overview places the selected lectures and talks in the context of his lifetime of work devoted to architecture and town planning as well as providing numerous insights into the influences that shaped his philosophy. Numerous sketches by Burgess and lots of archival photos illustrate the work. As Burgess's writings were intended to be delivered as lectures or talks, he used a light, informal tone, making them delightful reading even half a century later." Janet Arnett, Canadian Book Review Annual 2007 "This is a timely and very readable book, given our continuing respect for good architecture and the increasing urbanization of Canada, and specifically Alberta, the adopted home of Cecil Scott Burgess. This book is skilfully edited by Donald Wetherell, who also provides an excellent introduction and biography of Burgess. The book is organized in four parts, corresponding with eras in his professional development. The major part of the book is composed of a selection of Burgess's many public speeches and presentations. There are numerous sketches and diagrams that demonstrate Burgess's mastery of design... Burgess operated at several levels during his long career. He was very much an applied practitioner who believed strongly in the mastery of the technical skills and craft of architecture, design, and planning. Following his move to Canada in 1903, he taught architecture at McGill University, and he then started and single-handedly ran the professional architecture program at the University of Alberta in 1913--a remarkable achievement. Burgess interpreted architecture as a social art: good design meant integrating form with function. He also believed that town planning and architecture had to be integrated; cities had to be considered and planned with function and aesthetics considered equally... His intellectual range was remarkable. He could operate at citywide level, and he could design homes in exquisite detail. Throughout his career, Burgess designed residences. He was a strong proponent of the Arts and Crafts design style of architecture, with its emphasis on liveable, holistic, and highly functional buildings... He was, in short, a man of very considerable talents whose planning and design ideas

Donald Wetherell is Associate Professor in the Faculty of Communication and Culture at the University of Calgary.