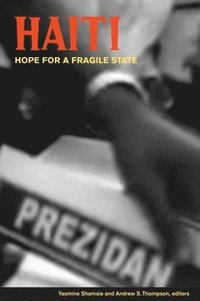 Hope for a Fragile State

av Yasmine Shamsie, Andrew S Thompson
Häftad Engelska, 2006-05-01
509
Köp
Spara som favorit
Skickas inom 5-8 vardagar.
Fri frakt inom Sverige för privatpersoner.
Finns även som
Visa alla 2 format & utgåvor
"This book...avoids the political debates about Jean-Bertrand Aristide that dominate so many current writings about Haiti. Its focus is the society itself, the sources of difference, the origins of violence, and the possibility of change....The superb work done by the editors has established a high standard for future efforts." (Terry Copp and John English from the Preface) Haiti is a country in the midst of a political, economic, ecological, and social crisis. Violence has sabotaged attempts to establish the rule of law, and state infrastructure is notably absent in much of the country, leading to an overall climate of insecurity. Haiti: Hope for a Fragile State sheds light on the varied and complex roots of the current crisis, dispels misperceptions, and suggests that the situation in Haiti, despite evidence to the contrary, is not completely desperate. It brings together diverse perspectives on development, the military, history, NGOs, and politics and discusses the peace-building efforts of the past, suggesting ways to move forward to make Haiti a strong state. Co-published with the Centre for International Governance Innovation
Visa hela texten

``This book ... avoids the political debates about Jean-Bertrand Aristide that dominate so many current writings about Haiti. Its focus is the society itself, the sources of difference, the origins of violence, and the possibility of change.... The superb work done by the editors has established a high standard for future efforts.'' -- Terry Copp and John English, Laurier Centre for Military Strategic and Disarmament Studies and the Centre for International Governance Innovation -- 200701 ``[Haiti: Hope for a Fragile State] is a useful summary of the state of play as it was in the autumn of 2005....Each chapter is by a different authority, each a specialist in fields from UN peacekeeping to private sector investment in developing countries to the role of international economic institutions, a different set of actors from those who frequently dominate foreign policy discussions. All have spent considerable time on the ground in Haiti, and this combined experience adds to the credibility of the theses presented....The value of [the] book is that it is a refresher course on how Haiti came to its present state and why it deserves international support....Haiti: Hope for a Fragile State is well worth reading as a summary of where Haiti stood before its recent election, and as an indication of the massive challenge the new government took on.'' -- Barbara McDougall -- Literary Review of Canada, January/February 2007, 200701

Yasmine Shamsie is an assistant professor in the Department of Political Science at Wilfrid Laurier University and a Fellow at the Centre for Research on Latin America and the Caribbean (CERLAC) at York University. She specializes in the political economy of democracy promotion and has written on the Organization of American States (OAS) peace-building efforts in Haiti. Andrew S. Thompson is a Special Fellow with the Centre for International Governance Innovation (CIGI) in Waterloo, Canada. His areas of specialization include human rights and international governance. He has written a number of book chapters and is co-editor of Haiti: Hope for a Fragile State (WLU Press, 2006).

Table of Contents for | Haiti: Hope for a Fragile State, edited by Yasmine Shamsie and Andrew S. Thompson Acknowledgments Preface | Terry Copp (Laurier Centre for Military Strategic and Disarmament Studies, WLU) and John English (Centre for International Governance Innovation, Waterloo, ON) Introduction--Haiti: Hope for a Fragile State | Yasmine Shamsie and Andrew S. Thompson The Historical Context 1. The Fall of Aristide and Haitias Current Predicament | Robert Fattton, Jr. (University of Virginia) 2. Assisting a Neighbour: Haitias Challenge to North American Policy-Makers | Robert Maguire (Trinity University, Washington, DC) 3. The Economic Dimension of Peace-building in Haiti: Drawing on the Past to Reflect on the Present | Yasmine Shamsie Justice and Security 4. Haitias Tenuous Human Rights Climate | Andrew S. Thompson 5. Testimony on the Situation in Haiti and Ongoing UN Mission | Col. Jacques Morneau (Canadian Forces College, Toronto, ON) Building Haiti through Civil Society 6. The Role of the Private Sector and the Diaspora in Rebuilding Haiti | Carlo Dade (Canadian Foundation for the Americas [FOCAL]) 7. Dissonant Voices: Northern NGO and Haitian Partner Perspectives on the Future of Haiti | Jim Hodgson (The United Church of Canada) Conclusion--La difficile sortie daune longue transition | Suzy Castor (Centre for Research and Training in Social and Economic Development [CRESFED], Haiti) Contributors Suzy Castor is a historian and the director of the Centre for Research and Training in Social and Economic Development (CRESFED) in Port-au-Prince. From 1968a1984 (during the Duvalier dictatorships) she was a professor and researcher at the National Autonomous University (UNAM) in Mexico, during which she was made a member of the prestigious National System of Researchers of the Mexican Academy of Sciences. She has published more than fifty articles in journals and edited volumes and has taught at universities in Mexico, the United States, Martinique, Guadeloupe, the Dominican Republic, and Grenada. Terry Copp is Professor Emeritus and director of the Laurier Centre for Military Strategic and Disarmament Studies at Wilfrid Laurier University. He is the author or co-author of thirteen books and numerous articles on the history of the Canadian Forces. He is the founding editor of the journal Canadian Military History , a regular columnist for Legion Magazine and the Kitchener-Waterloo Record , and chair of the Education Committee of the Canadian Battlefields Foundation. He has recently held a number of workshops and conferences exploring the role of the Canadian military in current international affairs. Carlo Dade is the senior policy advisor with the Canadian Foundation for the Americas (FOCAL), where he manages programs in transnationalism, corporate social responsibility, and Afro-descendants in the Americas. Prior to joining focal, Mr. Dade was representative for the Dominican Republic, Haiti, and the English-speaking Caribbean at the Inter-American Foundation (IAF), a US government foreign aid agency. He has worked with numerous US, Canadian, and Caribbean government agencies on remittance and Diaspora outreach policies and program development and organized the first conference on the role of the Canadian Diaspora in the development of Haiti. John English has long been recognized as one of Canadaas leading experts on international affairs. Holding a doctorate from Harvard University, he is a senior professor of history and political science at the University of Waterloo. Between 1993 and 1997, he served as a Liberal Member of Parliament. Subsequently, he served as a Special Ambassador for Landmines and as a Special Envoy for the election of Canada to the Security Council. He has also served as president of the Canadian Institute of International Affairs; and is currently the executive director of the Centre for International Governance Innovation, Canadaas largest think tank devoted exclusively to the study of internati