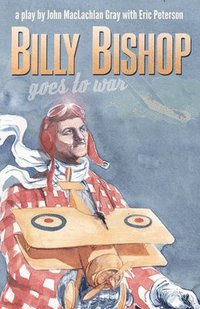 av John Gray, Eric Peterson
Häftad Engelska, 2013-02-14
179
Köp
Spara som favorit
Specialorder (osäker tillgång). Skickas inom 11-20 vardagar.
Gratis frakt inom Sverige över 159 kr för privatpersoner.
Finns även som
Visa alla 2 format & utgåvor
One of Canada's most successful and enduring musical plays, Billy Bishop Goes to War was first published in 1982 and went on to win the Los Angeles Drama Critics' Award and the Governor General's Award for Drama. In 2010, the celebrated story of the World War I flying ace -- credited with seventy-two victories and billed as the top pilot in the British Empire -- was revised to frame the original play as a retrospective. It is the same play it always was -- the difference is in the telling. Billy Bishop now appears in his later years, reflecting on his wartime exploits, and on the business of war and hero making. Bishop's reminiscence is not so much about the horror and death of war as it is about being young and intensely alive. "The prime of life / The best of men," Bishop sings, "It will never be / Like this again." A memory play about war, Billy Bishop has been going into battle onstage for more than thirty years. The Canadian classic is revisited in this second edition, where war is still a terrible thing, but some men say it was the greatest time of their lives. It's about the ironies and the price of survival. The play format is deceptively simple with a solo narrator who assumes multiple roles while his piano-playing sidekick offers sardonic musical comments. Cast of 2 men.
Visa hela texten

John Gray is the author of a novel, many magazine articles, several stage musicals, a book on tattoos, Lost in North America: The Imaginary Canadian in the American Dream (1994), Local Boy Makes Good (1987), and the internationally acclaimed Billy Bishop Goes to War (1982) with Eric Peterson. He has contributed sixty-five satirical pieces for The Journal on CBC Television, and is a frequent speaker on cultural issues. Among his many awards are the Governor General's Award, the Canadian Authors Association Award, and the National Magazine Award. He lives in Vancouver. Eric Neal Peterson, stage, film and television actor is recognized as one of the early pioneers of the collective theatre movement in Canada during the 1970s. In 1976, he began working with John Gray, a playwright/director and fellow alumnus from Tamahnous Theatre, to create his most critically successful work, Billy Bishop Goes to War, a two-man show (Gray appeared as the narrator and pianist) in which he played more than a dozen characters.