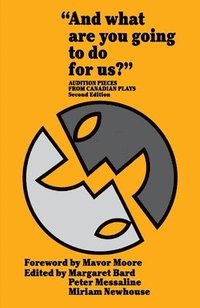 'And what are you going to do for us?'

Margaret Bard is well known in Canadian, American and British theatre. With Peter Messaline and Miriam Newhouse she coedited the audition book And What Are You Going to Do For Us?. Peter Messaline voiced the Daleks in the 1972 Dr. Who serial Day of the Daleks and has worked in England, Canada, and the United States. After the Stratford and Shaw Festivals, he has principal casting in series and MOW. He hasn't had a joe job in 40 years. Miriam Newhouse has acted in and directed theatre worldwide and across Canada. She has appeared in film, radio, and television and is the labour co-chair of the Ontario Advisory Committee for Health and Safety in the Live Performing Arts.