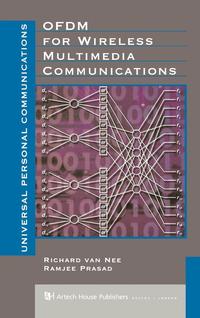 av Richard Van Nee, Ramjee Prasad, Richard Van Nee
Inbunden Engelska, 1999-12-01
1579
Köp
Spara som favorit
Skickas inom 5-8 vardagar.
Fri frakt inom Sverige för privatpersoner.
A study of OFDM, including a comparison with other forms of single carrier modulation methods. It provides the design guidelines needed to maximise benefits from this technology. There is practical advice on how to plan, design and use OFDM to make wireless multimedia communications happen. It offers a solid base for assessing the performance of wireless OFDM systems; explains how OFDM signals are formed using the Inverse Fast Fourier Transform, how the cyclic extension mitigates the effects of modulation, and how windowing can limit out-of-band radiation; discusses the sensitivity of OFDM to synchronization errors; examines the basics of direct sequence and frequency hopping CMDA, helpful in understanding combinations of OFDM and CDMA; explains Multicarrier CDMA, various transmitter architectures, and the pros and cons compared to other CDMA techniques; and includes a discussion of the combination of OFDM and frequency hopping CDMA to get a multiple access system with similar advantages to direct sequence CDMA.
Visa hela texten

Richard D.J. van Nee, Ph.D. is a member of the technical staff at Lucent Technologies/Bell Labs in the Netherlands. He received his Ph.D. in Electrical Engineering from Delft University, and his M.Sc. in Electrical Engineering from Twente University. Dr. van Nee was among those who proposed the OFDM-based physical layer, which was selected for standardization in IEEE 802.11, MMAC, and ETSI HiperLAN. Ramjee Prasad is Wireless Information and Multimedia Chair and Co-Director of the Center for Personkommunikation at Aalborg University. He is the author of CDMA for Wireless Personal Communications (Artech, 1996) and Universal Wireless Personal Communications (Artech, 1998). Dr. Prasad earned his Ph.D. in communications from the Birla Institute of Technology.