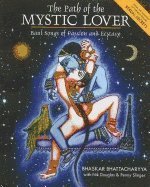 The Path of the Mystic Lover

Journeys in Song and Magic with India's Tantric Troubadours

." . . an intimate and poetic look into the lives of a people whose living expression is communion with the Divine. A must-read for Tantric initiates of all levels."--Tantra Magazine

Bloggat om The Path of the Mystic Lover

A journalist and filmmaker, Bhaskar Bhattacharyya was born in the Himalayas of Bengali parents, brought up in East Africa, and educated in England. He then returned to India and continued his studies with Gopinath Kavirag, one of India's foremost Tantric scholars. He now lives in northern India with his wife and family. <br>Nik Douglas' pioneering work on Tantra over the past two decades has resulted in a movie, "Tantra: Indian Rites of Ecstasy," and several books, including the best-selling "Sexual Secrets: The Alchemy of Ecstasy" with Penny Slinger. An important modern surrealist artist, Penny Slinger has had her work widely exhibited and published in the United States and Europe.