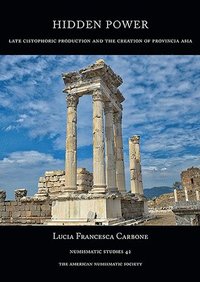 av Lucia Carbone
Inbunden Engelska, 2020-09-30
968
Bevaka
Spara som favorit
Tillfälligt slut – klicka "Bevaka" för att få ett mejl så fort boken går att köpa igen.
Using the production and circulation patterns of the Asian cistophorus as a case study, Hidden Power seeks to develop a better understanding of Roman monetary policy in the province of Asia between its establishment in the 120s BC and the beginning of the Mithraditic Wars. The first in-depth monograph on this popular and historically important coin series, this book will be a valuable resource for both scholars and collectors interested in Georgian, Mongol, and Islamic numismatics. Hidden Power catalogues and illustrates some 1,737 cistophoric tetradrachms and fractions from the mints of Ephesus, Pergamum, Tralles, Laodicea, Apamea, Adramyteum, Nysa, and Smyrna. Most of the coins included in the study are late cistophori, issues between 134.3 BC and the 60s BC. Appendix I provides a discussion of the late cistophori of Tralles struck after 89 BC, showing not only the direct correlation between cistophori and Roman military campaigns, but also Roman taxation. In Appendix II, circulation data have been combined with data derived from the Tralles die study in order to calculate cistophoric production for the entirety of provincia Asia until the end of the late cistophori. This estimate provides a means to assess the financial impact of Roman taxation and exploitation by Roman imperatores over the course of the first half of the first century BC.
Visa hela texten

Lucia Carbone is an ancient historian and numismatist who holds BA and MA degrees from Universita Sapienza (Rome) as well as MPhil and PhD degrees from Columbia University (New York). She is currently the Assistant Curator for Roman Coins at the American Numismatic Society. Her main research interest is the impact of Roman imperialism on the monetary and administrative systems of the eastern provinces of the Roman Empire between the second and first centuries BC.