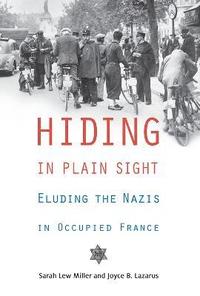 Eluding the Nazis in Occupied France

av Sarah Lew Miller, Joyce B Lazarus
Inbunden Engelska, 2012-11-15
339
Köp
Spara som favorit
Skickas inom 5-8 vardagar.
Fri frakt inom Sverige för privatpersoner.
Finns även som
Visa alla 2 format & utgåvor
Hiding in Plain Sight: Eluding the Nazis in Occupied France is an unusual memoir about the childhood and young adulthood of Sarah Lew Miller. Born in a large Orthodox Jewish family in Dereczyn, Poland, Sarah's family moved to Paris in 1937 to escape poverty. The German Occupation of France just three years later threatened her family's existence with repressive anti-Jewish laws and massive deportations of Jews to death camps. With the help of Christian neighbours, they evaded arrest for several years in Paris by living undercover beginning in July, 1942. After Sarah's mother was arrested and then rescued, Sarah's parents went into deep hiding, while their eight children found refuge in rural villages scattered around France. Through the help of a French Resistance organisation, the Sixieme, Sarah escaped to Switzerland in May, 1944 and her entire family was reunited in Paris after the Liberation in 1945. This personal and historical account of an era conveys the day-to-day life of a teenage girl living in Nazi-occupied France with the ever-present threat of death. Despite her loneliness, hardships and the derailment of her childhood dreams, she kept her strong family ties and maintained her faith in humanity. This memoir demonstrates the qualities of resilience and courage that enabled individuals and families such as Sarah's to survive. By reliving one family's way of coping with a social and political crisis, we learn about ourselves and our own society.
Visa hela texten

Sarah Lew Miller was born in Dereczyn, Poland in 1926, to a large Orthodox Jewish family. After moving to France to escape poverty, her family of ten survived four years of German Occupation (1940-1944). She has received several literary awards for her autobiographical writing. Joyce B. Lazarus grew up in New York City and earned a Ph.D. in French at Harvard University. She is Professor Emerita in Modern Languages at Framingham State University, where she taught for thirty-nine years. She has written extensively on French and Jewish cultural matters.