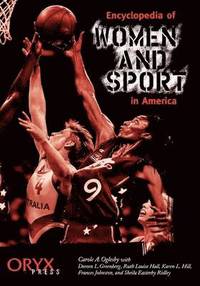 Encyclopedia of Women and Sport in America

av Doreen L Greenberg, Ruth L Hall, Karen L Hill, Frances Johnston, Carole Oglesby
Inbunden Engelska, 1998-03-01
989
Köp
Spara som favorit
The challenges and achievements of female athletes in the U.S. are the focus of this collection of nearly 300 articles and biographies that portray the diversity, depth, and meaning of their sports experiences. Written by prominent experts as well as by the athletes themselves, these articles offer a unique, authoritative perspective on topics ranging from women's earliest involvement in sports through recent events at the 1997 world and national championships.
Visa hela texten

CAROLE A. OGLESBY is a professor at Temple University, Philadelphia, and a contributor to the 1996 Report of the President's Council on Physical Fitness and Sport: Physical Activity and the Adolescent Female. An internationally recognized and award-winning authority and spokesperson on women and sports, Oglesby has authored and co-authored several books and articles over the past 20 years, including Women and Sport: From Myth to Reality (1978). She has served on the U.S. Olympic Committee Board of Directors and is the 1986 recipient of The Women's Sports Foundations Billie Jean King Award. DOREEN L. GREENBERG is a nationally certified consultant in sport psychology and a member of the U.S. Olympic Committee's National Sport Psychology Registry. She has worked with club, school, college, professional, and Olympic athletes from a variety of sports. Greenberg is the executive director of the Women's Sports Foundations (WSF) Philadelphia Program and a member of WSF's National Advisory Board. She is one of the primary authors of the 1997 Physical Activity and Sport in the Lives of Girls, a report for the President's Council on Physical Fitness and Sports. RUTH LOUISE HALL is a licensed psychologist and an associate professor in the Department of Psychology at The College of New Jersey. She is the co-editor of several books, including Images and Words in Women's Sports: Guidelines for Female Athletes and the Media, Public Relations, Advertising and Marketing Communities (1995). Hall is also a member of the Women's Sports Foundation National Advisory Board. KAREN L. HILL is an associate professor in the College of Health and Human Development, Pennsylvania State University, Delaware County Campus, and a member of the U.S. Olympic Committee's National Sport Psychology Registry. She speaks extensively about performance sports issues, was on the editorial board for Rebound: An Injury Recovery Guide, and has written and co-written numerous book chapters and articles pertaining to sports and physical education. FRANCES JOHNSTON is the founder and president of Management & Organizational Development Learning Systems, Inc.(MODLS), a Philadelphia-based consulting firm whose client list includes NIKE, Merrill Lynch, and Fleer/Skybox. She is a frequent lecturer on the psychological aspects of women's sports and organizational development. Dr. Johnston has taught in the Wharton Schools Leadership Program and Temple University, and is the womens rugby coach at the University of Pennsylvania. SHEILA EASTERBY RIDLEY is an instructor at Pennsylvania State University, Berks Lehigh Valley College, Reading, Pennsylvania. She has 25 years of teaching experience, in both Britain and the U.S., primarily at the university level in the fields of kinesiology, sport psychology, and sport history. She is well-known as a motivational speaker to diverse populations and has served as a sports psychologist to world and Olympic competitors, national teams and athletes of all ages in many different sports.