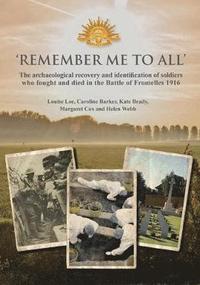 'Remember Me To All'

av Louise Loe, Caroline Barker, Kate Brady, Margaret Cox, Helen Webb
Inbunden Engelska, 2014-07-16
299
Köp
Spara som favorit
During the First World War, 250 soldiers were buried behind enemy lines in unmarked mass graves on the outskirts of the village of Fromelles, Northern France. They were among several thousand Australian and British soldiers who were killed in the Battle of Fromelles on the 19th and 20th July 1916, the first action on the Western Front to involve the Australian Imperial Force. This volume describes Oxford Archaeology's contribution to a joint Australian and British government mission, under the management of the Commonwealth War Graves Commission, to recover the soldiers and re-bury them with full military honours in a new Commonwealth War Graves cemetery in Fromelles. Bringing together an international team of forensic and investigative professionals, Oxford Archaeology excavated and scientifically examined the remains of the soldiers and items - remnants of uniforms, insignia, and poignant mementoes of home, among them a return train ticket and a heart-shaped leather pouch - buried with them. With the full support and co-operation of the soldiers' families, this evidence was employed alongside DNA and historical sources in an attempt to identify the soldiers by name for their commemoration on headstones. Since the recovery operation began in 2009, limited information has been revealed about the project. This volume is the comprehensive account of the work. Ultimately, however, this is a story of the soldiers, their bravery and sacrifice. With contributions by: Alison Anderson, Matt Bradley, Carl Champness, Ambika Flavel, Wayne Hoban, Peter Jones, Dai Lewis, Tim Loveless, Paul Murray, Dan Poore, Lucian Pricop, Ian Scott, Mark Viner, James Walker, Roland Wessling and Richard Wright
Visa hela texten

The archaeologists deserve the highest praise, and this report is of exemplary quality. -- Paul Stamper British Archaeology