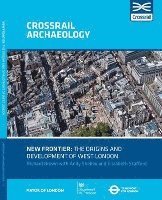 New Frontier: The Origins And Development Of West London

av Richard Brown, Andy Shelley, Elizabeth Stafford
Häftad Engelska, 2016-10-15
129
Köp
Spara som favorit
Skickas inom 7-10 vardagar.
Fri frakt inom Sverige över 159 kr för privatpersoner.
Oxford Street, Paddington Station, Soho; these are some of the most iconic landmarks of the capital and famous throughout the world, but the telling of their history is frequently an aside to the story of the City - the birthplace of the Capital with its Roman origins, Norman citadel, medieval buildings and financial dominance. But what lies beneath the busy streets and pavements of the West End? Why are there so many residential squares in this part of London? How did this agricultural landscape on the periphery of the urban centre evolve into one of the most prized property markets in the world? This book shines a spotlight on the history and archaeology of West London. It is informed by the desk-based historical research, site excavations and archaeological monitoring carried out before and during the construction of the western arm of Crossrail as it travels below ground from the tunnel portal at Royal Oak to Fisher Street via brand new stations at Paddington, Bond Street and Tottenham Court Road - a journey which includes the discovery of ice age Bison and reindeer, the rediscovery of long lost rivers and reveals the history of the Georgian property developers and the Great Western Railway.
Visa hela texten