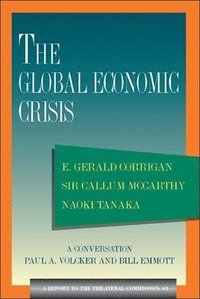 E. Gerald Corrigan is chairman of Goldman Sachs Bank USA. He ended a 25-year career with the Federal Reserve System when he stepped down from his position as president and chief executive officer of the Federal Reserve Bank of New York in 1993. Sir Callum McCarthy is the chairman of JC Flowers & Co UK Ltd, a nonexecutive director of the Chinese bank ICBC and of Intercontinental Exchange, and a member of the board of HM Treasury. He was chairman of the UK Financial Services Authority from 2003 to 2008. Naoki Tanaka is president of the Center for International Public Policy Studies, Tokyo, Japan. He was president of the 21st Century Public Policy Institute and served as chairman of Japan's Postal Privatization Committee and of its Financial System Council. Paul A. Volcker served as chairman of the board of governors of the Federal Reserve System from 1979 to 1987 and as chairman of the National Commission on the Public Service. He is currently chairman of the board of trustees of the Group of 30, an international organization that examines the impact of economic and financial decisions by the public and private sectors. Bill Emmott was editor of the Economist from 1993 until 2006. He is the author or coauthor of six books, including Rivals: How the Power Struggle between China, Indian and Japan Will Shape Our Next Decade (2008).