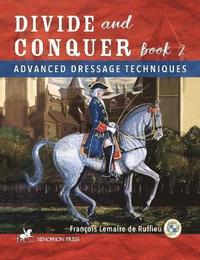 av Francois Lemaire De Ruffieu
Inbunden Engelska, 2017-02-01
529
Köp
Spara som favorit
Skickas inom 10-15 vardagar.
Fri frakt inom Sverige för privatpersoner.
Kan tyvärr inte längre levereras innan jul.
Finns även som
Visa alla 1 format & utgåvor
Just as small streams make big rivers, Divide and Conquer Book 1 explains a myriad of details on how to address each of the horse's body parts for training purposes. Divide and Conquer Book 2 regroups these details to show how to accomplish all of the upper level movements and provides several techniques designed to educate riders to achieve their short and long term goals. In a clear and simple method, François Lemaire de Ruffieu describes all the longitudinal and lateral movements including flying changes of lead at close intervals, canter pirouette, piaffe and passage, along with patterns and exercises that develop them. All techniques for the upper level movements employ the horse's natural reflexes to stimuli at their foundations. The techniques provide a sound basis of training for any level and any discipline. Dressage is an Art, and as such, can be viewed in many different ways. History shows that some extraordinary riding masters were radically different in their theories: Riders physical characteristics and differences in horse breeding have influenced Riding Masters leaving us a rich history of techniques with which to educate our horses properly. Dressage tends to follow fashion. Nevertheless, the goals of dressage have always remained the same: render the horse agreeable, easy to ride, well-balanced, straight and responding instantaneously to the slightest aids. Dressage is a school of obedience as well as a school of thought.
Visa hela texten

Franois Lemaire de Ruffieu grew up in France. He was first trained by Master Jean Couillaud and graduated in 1967 from the Cadre Noir, one of the oldest and most prestigious riding academies in Europe. During his 6 years in the cavalry at Saumur and Fontainebleau, he studied and showed extensively in dressage, stadium jumping, three day eventing and steeplechase. He taught riding in Paris at the Military School of War. Since 1978, he has given clinic throughout United States of America and Europe. His students have won year-end high-score awards in equitation, hunter classes, stadium jumping, dressage, and combined training. Since 1988, he has been a panel member of the American Riding Instructor Certification Program and in 1996 he was awarded the title of Master Instructor. He currently lives in Florida.