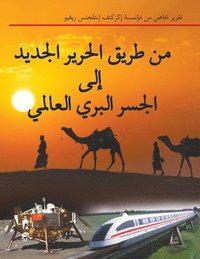 av Helga Zepp-Larouche, Michael Billington, Rachel Douglas
Häftad Arabiska, 2016-03-17
599
Köp
Spara som favorit
EIR's ROAD-MAP TO THE NEW WORLD ECONOMIC ORDER! EIR's comprehensive study of the progress of the Eurasian Land-Bridge project which Lyndon and Helga LaRouche have championed for over 20 years. The 400-page report, entitled The New Silk Road Becomes the World Land-Bridge, is nothing less than a conceptual, and often physical, road-map to a new world economic order. This path is currently being charted by the nations of the BRICS (Brazil, Russia, India, China, and South Africa), who are leading a dynamic of global optimism toward real economic development, complete with new credit institutions and major high-technology projects for uplifting all mankind. After an introduction by Helga Zepp-LaRouche, the report lays out the Metrics of Progress, based on the economic scientific principles developed by renowned physical economist Lyndon LaRouche. It then proceeds region by region, to present the stunning progress, and plans, which have been made toward the Eurasian Land-Bridge design that the Chinese government laid out in 1996, and other nations have begun to rally behind in recent years. The report is complete with many full-color maps of its featured development corridors.
Visa hela texten