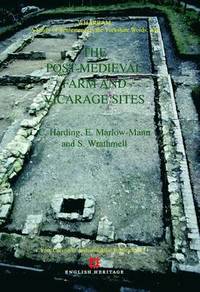 The Post-medieval and Vicarage Sites

av C Harding, E Marlow-Mann, S Wrathmell
Inbunden Engelska, 2010-06-30
319
Köp
Spara som favorit
Skickas inom 7-10 vardagar.
Fri frakt inom Sverige för privatpersoner.
The present volume is the penultimate report on excavations at the English deserted medieval village site of Wharram Percy, in North Yorkshire. It charts the history of settlement at Wharram from the early 16th to the early 19th centuries, the period which began with the destruction of the medieval farming community and its open-fields, and ended with the abandonment of the one remaining farmstead occupying the former village site, and of the adjacent vicarage. The volume details the significant but unevenly surviving documentary sources relating to the final depopulation of the village, and to the vicarage and farmstead which continued for three centuries to occupy the valley terrace immediately to the north of the churchyard. It also details the very fragmentary structural sequences excavated in each of these homesteads and attempts, not entirely successfully, to relate the documents to the building remains. More successfully, the late 18th and early 19th-century houses are related to contemporary local buildings traditions.The artefacts associated with the two homesteads are catalogued, illustrated and discussed in detail, as they constitute one of the most significant and extensive assemblages of material culture from a small rural community of this period. The ceramics, clay tobacco pipes and vessel glass are among the categories of artefact recorded in unparalleled numbers from this type of settlement. The chapters relating to environmental evidence include not only a full faunal analysis but also a detailed report on the in situ charred remains of the crops that were being stored in the vicarage barn when it was destroyed by fire in 1553.
Visa hela texten