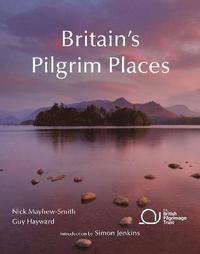 The first complete guide to every spiritual treasure

av Nick Mayhew-Smith, Guy Hayward
Häftad Engelska, 2020-08-06
259
Köp
Spara som favorit
Skickas inom 7-10 vardagar.
Fri frakt inom Sverige för privatpersoner.
Britain's Pilgrim Places captures the spirit of 2,000 years of history, heritage and wonder. It is the complete guide to every spiritual treasure, including 500 enchanting holy places throughout England, Wales and Scotland and covers all major pilgrimage routes. Produced in collaboration with The British Pilgrimage Trust, this book encapsulates the timeless quest of the human spirit to find meaning, connection and peace. Each listing is illustrated in full colour and written and presented in a way that appeals to everyone. From wild hermit islands to city-centre cathedrals alike, there is something to surprise and enlighten anyone with a sense of the sacred. 2020 is the Year of the Pilgrimage and the Year of Cathedrals, and events are being held throughout the year to mark a revival in pilgrim places, cathedrals and free-form spiritual expression. The British Pilgrimage Trust's mission is to harness the quiet but powerful resurgence of interest in ancient ways of finding meaning and peace in the landscape. Britain's Pilgrim Places follows on from best-selling Britain's Holiest Places which became a 6-part BBC television series.
Visa hela texten

Nick Mayhew-Smith is a researcher and travel writer. He has spent 14 summers visiting all corners of Britain to research the country's sacred landscapes, producing three books, a BBC television series called Pagans & Pilgrims and a PhD thesis along the way. His best-selling guide Britain's Holiest Places (2011) has helped to inform this book, while his PhD thesis on Celtic nature spirituality was shaped into The Naked Hermit (2019). He is an honorary research fellow at Roehampton University, where he works with the Susanna Wesley Foundation. Guy Hayward co-founded the British PilgrimageTrust in 2014, and leads guided pilgrimages around Britain. He has been interviewed about modern pilgrimage for the BBC Two TV series Pilgrimage and Channel 4's Britain's Ancient Tracks, contributes to BBC Radio 4, and has been featured in Porter, Tatler, Conde Nast Traveller, The Times, The Guardian and The Telegraph. He has created pilgrim routes for English Heritage and, with Nick Mayhew-Smith, for the Association of English Cathedrals. Guy completed a PhD at Cambridge on how singing forms community, founded choralevensong.org and is half of musical comedy double act Bounder & Cad. guyhayward.com Marcus Green, our cathedrals photographer, is a part time management consultant working in the voluntary sector with an expertise in charity leadership. He is also CEO of Action on Pre-eclampsia and a non-executive director. During 2019 he visited and photographed over 100 cathedrals including every Anglican and Catholic cathedral in England and Wales. He lives in Gloucestershire with his family. Between them the members of our creative team have visited every UK site in this book.