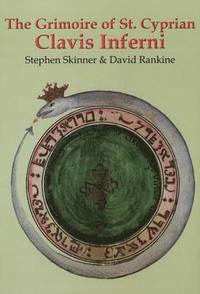 av Stephen Skinner, David Rankine
Inbunden Engelska, 2009-12-03
429
Köp
Spara som favorit
Skickas inom 3-6 vardagar.
Fri frakt inom Sverige för privatpersoner.
There have been many grimoires attributed to St Cyprian of Antioch due to his reputation as a consummate magician before his conversion to Christianity, but perhaps none so intriguing as the present manuscript. This unique manuscript (unlike the more rustic examples attributed to St Cyprian called the Black Books of Wittenburg, as found in Scandinavia, or the texts disseminated under his name in Spain and Portugal) is directly in line with the Solomonic tradition, and therefore relevant to our present series of Sourceworks of Ceremonial Magic. It is unique in that instead of being weighed down with many prayers and conjurations it addresses the summoning and use of both the four Archangels, Michael, Raphael, Gabriel and Uriel as well as their opposite numbers, the four Demon Kings, Paymon, Maimon, Egyn and Oriens. The later are shown in their animal and human forms along with their sigils, a resource unique amongst grimoires. The text is in a mixture of three magical scripts, Greek, Hebrew, cipher, Latin, (and reversed Latin) with many contractions and short forms, but expanded and made plain by the editors. The title literally means 'The Key of Hell with white and black magic as proven by Metatron'.
Visa hela texten