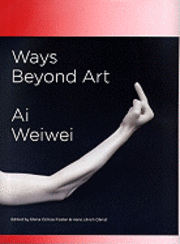 av Elena Ochoa Foster, Hans-Ulrich Obrist, Uli Sigg
Inbunden Engelska, 2009-05-29
439
Köp
Spara som favorit
Skickas inom 5-8 vardagar.
Fri frakt inom Sverige för privatpersoner.
This is a catalogue from the first Spanish exhibition of the Chinese artist, Ai Weiwei (China, 1957). This artist via photography, sculpture, architecture, installations and his blog has become an obligatory reference for other artists and particularly for contemporary Chinese art. The exhibition, Ways Beyond Art, shows legendary works such as "Bubbles", "The Wave" and "The Coca-cola Vase". Each piece has been produced from the kilns which Weiwei built for firing his own work. "The Coca-cola Vase", belongs to a series which reproduces forms of Neolithic and Chinese Dynasty antique vases with the Coca-cola logo stamped on their exterior. The work is a demonstration of the ironic humour of the artist which he unites in the same object with traditional Chinese culture (an ingredient which carries enormous weight in the artistic production of China) and simultaneously, provocatively questioning the way in which Chinese society is confronting its recent convergence with the West.
Visa hela texten

The first showing of works by Ai Weiwei took place in Peking in 1979. Since then he has had exhibitions in the United States, Japan, Germany, Belgium, Korea, Italy, Switzerland, Norway, France, Britain and Canada. Pieces of his have also been included on various occasions in the Venice Biennial on architecture, in the first Guangzhou Triennial in China in 2002, in the 2006 Sydney Biennial: Zones of Contact, as well as in Documenta Kassel 12 where a gigantic installation entitled, Template was destroyed by a storm. Weiwei decided to respect the elements and exhibited the sculpture as the wind had left it. The exhibition catalogue of Ways Beyond Art contains a detailed professional biography of Ai Weiwei.