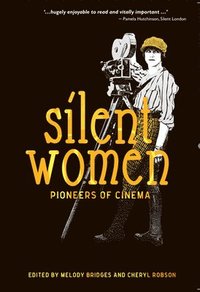 av Bryony Dixon, Shelly Stamp, Ellen Cheshire, Maria Giese, Karen Day
Häftad Engelska, 2015-09-01
219
Köp
Spara som favorit
Skickas inom 3-6 vardagar.
Fri frakt inom Sverige för privatpersoner.
Why have women such as Alice Guy-Blache, the creator of narrative cinema, been written out of film history? Why have so many women working behind the scenes in film been rendered invisible and silent for so long? Silent Women: Pioneers of Cinema explores the incredible contribution of women at the dawn of cinema when, surprisingly, more women were employed across the board in the film industry than they are now. It also looks at how women helped to shape the content, style of acting and development of the movie business in their roles as actors, writers, editors, cinematographers, directors and producers. In addition, we describe how women engaged with and influenced the development of cinema in their roles as audience, critics, fans, reviewers, journalists and the arbiters of morality in films. And finally, we ask when the current discrimination and male domination of the industry will give way to allow more women access to the top jobs. In addition to its historical focus on women working in film during the silent film era, the term silent also refers to the silencing and eradication of the enormous contribution that women have made to the development of the motion picture industry.
Visa hela texten

`... inspirational reading for any woman who dreams to express her vision through film in any direction this industry takes us. Only by understanding our past can we embrace our greatest future.' - Gayle Nachlis, Women In Film Los Angeles `... a lively collection which promises to raise a diversity of questions for viewers, makers and teachers of film about women's role worldwide in the emergence of cinema.' - Professor Christine Gledhill, University of Sunderland `... shows how women's voices were heard and helped create the golden age of silent cinema, how those voices were almost eradicated by the male-dominated film industry, and perhaps points the way to an all-inclusive future for global cinema. - Paul Duncan, Film Historian

Editors Melody Bridges studied English and Drama at Cambridge University and has written, acted and directed for theatre before working in TV where she developed, wrote, produced and directed two television series. In addition to contributing to Celluloid Ceiling, she writes a weekly page for a newspaper, and is Artistic Director of Worthing's WOW Festival. In 2014, she was a Finalist as Influential Woman of the Year at the NatWest Venus Awards. She has recently given a TEDx talk about inspiring change. Cheryl Robson is a producer/director of several short independent films, most recently Rock 'n' Roll Island which was nominated for Best Short Film at Raindance, London 2015. She worked at the BBC for several years and then taught filmmaking at the University of Westminster, before setting up a theatre company. She also created a publishing company where she has published over 150 international writers. As a writer, she has won the Croydon Warehouse International Playwriting Competition and as an editor, she recently worked with Gabrielle Kelly on Celluloid Ceiling: women film directors breaking through, the first global overview of women film directors. She also received a Gourmand Special Jury Prize for Peace with author Robin Soans, for The Arab-Israeli Cookbook.