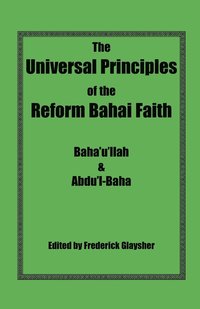 The Universal Principles of the Reform Bahai Faith

av Baha'U'Llah, Abdu'L-Baha, Frederick Glaysher
Häftad Engelska, 2007-12-01
189
Köp
Spara som favorit
Skickas inom 10-15 vardagar.
Fri frakt inom Sverige för privatpersoner.
Finns även som
Visa alla 1 format & utgåvor
The Universal Principles of the Reform Bahai Faith collects many of the early writings of Baha'u'llah and Abdu'l-Baha, published in the West, seeking to restore and preserve their vision of the oneness of God, humanity, and all religions. In addition to all of the 1912 Universal Principles of the Bahai Movement, the book includes Baha'u'llah's Hidden Words, selections known as the Spirit of the Age, an address by Abdu'l-Baha at the Friends' Meeting House in London in 1913, and many Bahai prayers for community and individual worship and meditation.

Though beginning in 2004, the Reform Bahai Faith traces its origin to the early Bahais Ruth White, Mirza Ahmad Sohrab, and Julie Chanler, who sought to preserve the Teachings of Abdu'l-Baha after his passing in 1921. They and other early American Bahais understood the Bahai Faith was being turned into an oppressive organization, under what the British Museum document expert Dr. C. Ainsworth Mitchell judged to be a fraudulent will and testament.

Baha'u'llah, the Founder of the Bahai Faith, believed in and taught a moderate, universal religion, grounded in a separation of church and state, not a theocracy, and members of the Reform Bahai Faith seek to recover and renew that saving vision for all humanity.

The newcomer to the Bahai Teachings will find here a brief but eloquent and inspiring introduction to the Faith of Baha'u'llah, while people already familiar with it will find a refreshing breeze has returned to revivify and uplift the spirit.

This book marks the first publication of the Reform Bahai Press, which will publish several more titles during the next few years.
Visa hela texten