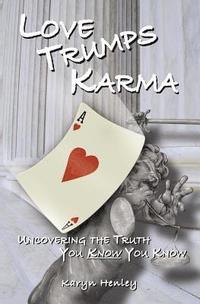 av Karyn Henley
Häftad Engelska, 2005-01-01
117
Köp
Spara som favorit
Your Hindu, Buddhist, and New Age friends seem kinder, more accepting and generous, and less judgmental than some Christians you know. And Christians are supposed to be the most loving people on earth! Go figure! Your friends may think the Bible is just a rule book for a religion that is narrow-minded and condemning. Some say that there is no absolute truth. Your friends talk about good karma, bad karma. They're right. They've got karma. You've got karma. Like it or not, we've all got karma. But that's not all we have in common. In Love Trumps Karma, you will uncover what we all know we know and find out what you really believe - and why.
Visa hela texten

Karyn Henley is an award-winning author and educator and a popular speaker around the U.S. and internationally. With an MFA in Writing for Children and Young Adults, she has over 100 published titles, from picture books and preschool musicals to novels for young adults, parent-teacher guides, and curricula for preschool and elementary children. She has also written, recorded, and performed songs for children worldwide. She is best known for writing the original The Beginner's Bible, which sold over five million copies and was translated into 17 languages. Awards include the Excellence in Children's Ministry Award, the Silver Medallion Award, the Gold Book Award, a Silver Angel Award, and the Excellence in Mass Media Ministry Award from Abilene Christian University, her undergrad alma mater.