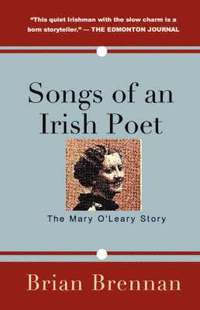 Songs of an Irish Poet

av Brian Anthony Brennan
Häftad Engelska, 2007-08-01
149
Köp
Spara som favorit
The first full-length biography of one of the most celebrated Irish-language folk poets of the nineteenth century, one of the only poets of her generation to achieve name recognition after her death. The book contains new English-language translations of Mary O'Leary's entire poetic canon, including her best-known song, "The Battle of Keimaneigh" (Cath Chim an Fhia), a stirring description of an armed clash in 1822 between militia troops and a secret society of Catholic tenant farmers known as the Whiteboys.
Visa hela texten

"an important contribution to the literature of irish studies at a time when there is a worldwide resurgence of interest in celtic poetry and song." – catherine ketch, irish examiner

Brian Brennan is an award-winning and best-selling author of 12 critically acclaimed narrative non-fiction books about the colourful personalities of Western Canada's past.
One of his titles, Romancing the Rockies, won him the inaugural Dave Greber Freelance Writers Award and a nomination for the Canadian Rockies Award. Another title, Scoundrels and Scallywags, topped the Canadian best-seller charts for more than 18 months and was short-listed for the prestigious Grant MacEwan Author's Award.
Brian's latest title, Brief Encounters: Conversations with Celebrities, is a collection of stories based on interviews he did during his 15 years as an arts and entertainment reporter. These stories have been updated and expanded to take into account events that have occurred since the original interviews were published.
His other books include his memoirs, Leaving Dublin: Writing My Way from Ireland to Canada; the first biography of renowned Canadian historian James H. Gray; and the first biography of the celebrated 19th century Irish folk poet Mary O'Leary, which was nominated for the Irish Times Literary Prize.
A former staff writer for the Calgary Herald, Brian has written freelance articles and columns for magazines and newspapers across the United States and Canada, including the New York Times, Globe and Mail and Toronto Star.
Born and educated in Dublin, Ireland, Brian immigrated to Canada in 1966 and settled in Calgary in 1974. Over the course of his varied career, he has worked as a golf caddy, lounge waiter, customs officer, nightclub pianist, church organist, radio news announcer, and a featured storyteller on CBC Radio's Daybreak Alberta - a popular program heard across the province.
As a newspaper and magazine journalist, Brian has written on a variety of topics including politics, business, theatre, contemporary music, medicine, education, and travel. He has served on the national boards of The Writers' Union of Canada, the Canadian Association of Journalists and the Canadian Theatre Critics Association.
Brian has won national and regional awards in Canada for his journalism. They include two Western Magazine Awards (Gold Award Alberta, Science and Technology Award), for stories on the regeneration of animal brain cells, and the national Hollobon Award for medical writing in Canada, which he won for a magazine feature story on open-heart surgery. His most recent awards include a Lifetime Achievement Award from the Petroleum HIstory Society of Canada and the Features Writing Award (runner-up) from the Professional Writers Association of Canada.
For more information visit his website at www.brianbrennan.ca

mary o'leary and her family

mary o'leary and her poems

the songs of mary o'leary