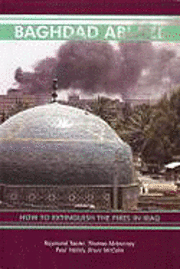 How to Extinguish the Fires in Iraq

av Raymond Tanter
Häftad Engelska, 2007-09-01
349
Bevaka
Spara som favorit
Tillfälligt slut – klicka "Bevaka" för att få ett mejl så fort boken går att köpa igen.
Following the liberation of Iraq in 2003, why are Iraqis still fighting? To extinguish the fires that burn in Iraq, one must discover why it is ablaze, what would move Iraqi politicians to put out the fires, and what would induce Iraq's neighbours to quench the flames. So, what are the causes of violence in Iraq? First, the occupation of Iraq provided the initial spark and ongoing heat for the insurgencies. Second, ethnic and religious strife, prior discrimination by Sunnis against Shiites, disputes over federalism, de-Baathification policies, differences over a proposed national oil law, and disputes about equitable distribution of oil and natural gas revenues contribute to Iraqi instability. Third, Tehran's subversive sponsorship of militias is like oxygen fanning the flames of conflict in Iraq. This book will offer ideas on how to put out the fires.
Visa hela texten

Raymond Tanter served at the White House as a Senior Member on the National Security Council staff, from 1981 to 1982. In 1983-1984, he was personal representative of the Secretary of Defense to arms control talks in Madrid, Helsinki, Stockholm, and Vienna. In 1967, Tanter was deputy director of behavioral sciences at the Advanced Research Projects Agency of the U.S. Department of Defense and a member of the Civilian Executive Panel, Chief of Naval Operations, 1980-1981.In 2005, Tanter helped found the Iran Policy Committee and serves as its President. Tanter teaches courses on terrorism and weapons proliferation at Georgetown University.