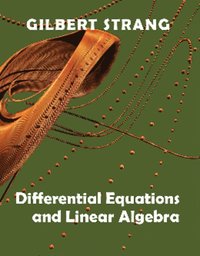 av Gilbert Strang
Inbunden Engelska, 2015-02-12
549
Köp
Spara som favorit
Skickas inom 10-15 vardagar.
Fri frakt inom Sverige för privatpersoner.
Differential equations and linear algebra are two central topics in the undergraduate mathematics curriculum. This innovative textbook allows the two subjects to be developed either separately or together, illuminating the connections between two fundamental topics, and giving increased flexibility to instructors. It can be used either as a semester-long course in differential equations, or as a one-year course in differential equations, linear algebra, and applications. Beginning with the basics of differential equations, it covers first and second order equations, graphical and numerical methods, and matrix equations. The book goes on to present the fundamentals of vector spaces, followed by eigenvalues and eigenvectors, positive definiteness, integral transform methods and applications to PDEs. The exposition illuminates the natural correspondence between solution methods for systems of equations in discrete and continuous settings. The topics draw on the physical sciences, engineering and economics, reflecting the author's distinguished career as an applied mathematician and expositor.
Visa hela texten

Gilbert Strang is a professor of mathematics at the Massachusetts Institute of Technology, where his research focuses on analysis, linear algebra and PDEs. In addition, he is the author of many textbooks and his service to the mathematics community is extensive, having spent time as President of SIAM, Chair of the Joint Policy Board for Mathematics as well as membership of various other committees and boards. The awards that Professor Strang has received for his research and teaching include the Chauvenet Prize (1976), the Award for Distinguished Service (SIAM, 2003), the Graduate School Teaching Award (MIT, 2003) and the Von Neumann Prize Medal of the US Association for Computational Mechanics (2005), among others. He is a Member of the National Academy of Sciences, a Fellow of the American Academy of Arts and Sciences and an Honorary Fellow of Balliol College, Oxford.