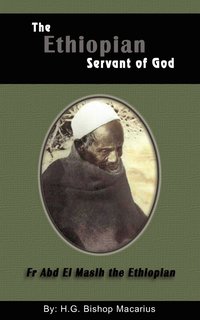 The Ethiopian Servant of Christ

av Bishop Macarius
Häftad Engelska, 2009-10-20
149
Köp
Spara som favorit
Skickas inom 10-15 vardagar.
Fri frakt inom Sverige över 159 kr för privatpersoner.
Fr Abd el-Mesih el-Habashi is one of the twentieth century's great ascetics who lived in the Egyptian desert. His life is a witness to the continuity of the desert spirituality of the 4th century. He was man who was not concerned about anything or for anyone. His only concern was for the One.

His eyes were directed towards eternity. He was content with enough food sufficient to keep him alive and enough clothing to cover his nakedness. He chose God as his way as well as his means.

He unintentionally attracted us to him through sharing and exchanging the many tales that thousands of people have experienced in mixed feelings of wonder, joy, and deep contemplation. The multitude of people who saw him and dealt with him have all attested to that lion who has the heart of a child. He had a clear vision and a way of life. He did not act haphazardly but his behavior was a result of deep spiritual understanding.

Fr Abd el-Mesih's character combines the weakness of the human nature and the strength of the spiritual personality. He was not of a special breed of people, like anyone he was agitated, tasted pain, and suffered trials. He left all these experiences for us as an example in persevering in trials. He lived an austere ascetic life and experienced many hardships. The devil waged many wars against him but he escaped them all.

All the information in this book are documented in either voice recordings or written accounts of Metropolitans, Bishops, Priests, Monks, or Lay people, who gratefully shared their stories and photos that they had for this great father.
Visa hela texten