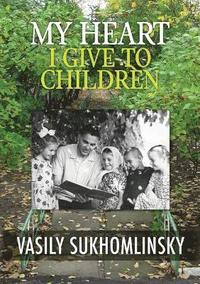 My Heart I Give to Children

av Vasily Aleksandrovich Sukhomlinsky
Häftad Engelska, 2016-04-03
239
Köp
Spara som favorit
Finns även som
Visa alla 1 format & utgåvor
Vasily Sukhomlinsky's My Heart I Give to Children is an educational classic that has sold millions of copies in 30 languages. It describes Sukhomlinsky's ground-breaking work with thirty-one students in rural Ukraine, during an experimental preschool year and the subsequent four years of their primary schooling. Sukhomlinsky wrote over thirty books, all based on his personal experience as a teacher and school principal at Pavlysh Secondary School in rural Ukraine during the 1950s and 1960s. His school became famous in educational circles and hosted thousands of visitors who came from the length and breadth of the Soviet Union and beyond. One visiting principal wrote, "Pavlysh Secondary School should be renamed a university! We say this quite seriously: a feeling of wonder and admiration overwhelms anyone with the slightest love for children and schools." (V.A. Karakovsky) Another wrote, "I have spent only one day in this remarkable school … but I have learnt as much as I did in four years at teachers college." (M. Manukian) Sukhomlinsky's writings continue to enjoy popularity, and are especially influential in China. My Heart I Give to Children was many years ahead of its time. It addresses issues such as our relationship with nature, how to nurture children's souls in the face of the sometimes negative influences of mass media, how to help children develop empathy for others, how schools can develop strong relationships with families, how children's brains function and develop, how to foster an intrinsic love for learning, and how to support children who struggle to acquire skills in literacy and numeracy. The work is addressed to school principals and teachers, and anyone interested in the upbringing of young children.
Visa hela texten

"It reminded me of why I became a teacher." An Australian school teacher.

Vasily Sukhomlinsky (whose name has also been transliterated as Vasillii Sukhomlinskii and Vasyl Sukhomlynsky) was the most influential Soviet educator of the 1950s and 1960s. He lived from 1918 to 1979, and wrote over 30 books and over 500 articles, many of which have been translated into multiple languages, and sold millions of copies. Sukhomlinsky tried to redirect the course of Soviet education towards a greater concern for the needs of individual students. He was influenced by earlier educators such as Leo Tolstoy and Janusz Korczak. Sukhomlinsky's works continue to enjoy popularity in his homeland (Ukraine) and in Russia, where many of his works were first published. His writings are also immensely popular in China, where he is one of the most influential foreign educators.

Acknowledgements ix
Translator's introduction x
Preface xix
Part One - The School of Joy 1
My educational convictions 2
The first year - studying the children 15
My students' parents 16
A school under the open sky 31
Our Nook of Dreams 47
Nature - the source of health 54
Each child is an artist 60
Caring for the living and the beautiful 63
We listen to the music of nature 71
Our winter joys and concerns 84
Our first Day of the Lark 88
How we learnt to read and write 89
You live amongst other people 100
Our class is a friendly family 108
We live in the garden of health 109
Thoughts on the eve of the first school year 110
Part Two - The Years of Childhood 115
What is primary school? 116
Health, health and once again health 121
Study is a part of our spiritual life 132
Three hundred pages of the 'book of nature' 152
What comes from where? 173
Our journeys around the globe 188
Give children the joy of success in study 195
The story room 212
The story continues - our Island of Wonders 222
Books in the spiritual life of a child 233
Love for our native language 243
Our Nook of Beauty 266
On the threshold of an ideal in life 270
Not a day without concern for others 278
Work inspired by noble feelings 289
You are future custodians of our homeland 311
The children join the Pioneer Organisation 326
To fight and overcome, like Lenin 328
The Brave and Fearless Patrol 333
We say farewell to summer 341
Other Publications 345