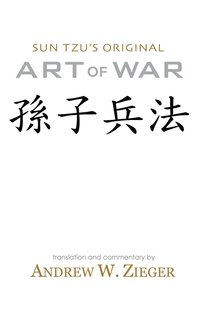 1. "Know your enemy and know yourself, win without danger."

4. "Those who forego contemplation, merely expecting an enemy to be easy, will be captured by him."

5. "When doing battle, prizing victories that take too long dulls weapons and grinds down spirits."

From business to politics to sports, the Art of War is as timely for leaders today as it was for military strategists in ancient China: strategy, negotiation, management, analysis, psychology, logistics, risk, conflict -- everyone from Secretary of State Colin Powell to influential tech CEO Larry Ellison to NBA super-coach Phil Jackson has profited from the timeless wisdom of Sun Tzu's classic.

This special pocket edition of Sun Tzu's Original Art of War uses the most recent archaeological and academic research to recover the original Chinese text and faithfully recreate it in English, avoiding the unnecessary wordiness and inaccurate abstractions of other English translations.

"The Art of War is among the greatest classics of military literature ever written. Sun Tzu warfare is as applicable today as when the book was written some 2,500 years ago.... Pick up The Art of War and read it." ~ General A.M. Gray, Marine Corps Gazette

"When the Japanese, especially those in business, want information on the subject, many turn to an ancient Chinese, not Japanese, military manual, The Art of War.... Shows managers how to be fearless in resolving conflicts." ~ Boardroom Reports

"Unlike most of the more wordy and interpretive translations of the Sun Tzu, Andrew Zieger gives us a unique bare bones rendering of this canonical texta series of word picturesthat, in applying his own image-to-image technique, captures the poetically laconic force of the original. In this rendering, the Sun Tzu has not needed to surrender the beauty of its language for the victorious expression of its meaning." ~ Roger T. Ames, Leading scholar in ancient Chinese literature and translator of "Sun Tzu: The Art of Warfare" (1993)

"A highly accessible rendering of the influential work of military theory. Successfully evokes the careful, meditative response Sun- Tzu recommends to would be war-makers. Of use to anyone engaged in competitive endeavors, be they on the battlefield or at the poker table." ~ Martin Harris, Poker journalist and author of the novel Same Difference (2010)
Visa hela texten