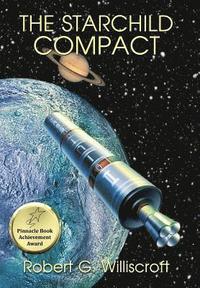 A novel of interplanetary exploration

av Robert G Williscroft
Inbunden Engelska, 2014-12-15
299
Köp
Spara som favorit
Skickas inom 10-15 vardagar.
Fri frakt inom Sverige för privatpersoner.
Finns även som
Visa alla 2 format & utgåvor
The Starchild Compact is an epic tale of beginnings, of roots, of what might have been, and what might be.The Starchild Compact is an adventure of heroic proportions, commencing on a planet 500 light years distant, arriving here just a few years from now, and ending up in the far distant expanses of the Universe.In a near future world dominated by NATO, the Eastern Block, and the Persian Caliphate, Jon Stock takes his exploration team to Saturn's moon, Iapetus - which they believe may be an artifact. While on Iapetus, the explorers meet with the mysterious Founders, whose technology is way beyond Earth's. The Founders' revelations impact the entire Solar System with momentous implications going backward and forward in time. This paves the way for a joint push by the explorers and Founders together into the distant reaches of the Galaxy.
Visa hela texten

Williscroft tackles the germane and "heavy" issues of tomorrow's mores and the religious direction our society is taking while crafting a fascinating novel that is hard to put down. - Myron R. Lewis, Co-author with Ben Bova of several SF stories including parts of The Dueling Machine.

The crew's individual quirks and cultural traditions come face-to-face with the reality of a new paradigm with global repercussions when they discovers irrefutable evidence that the builders of Iapetus still have a presence in the Solar System. Highly recommended! - Matthew Severe Author of The Lariat Thief

Readers will be amazed at the depth of Williscroft's characters and the meticulous science and engineering that he brings to bear. The Starchild Compact is a remarkable story of politics, intrigue, science, engineering, and derring-do, driven by imaginative speculation. - Martin Bloom, Former President of the Los Angeles Adventurers' Club

This book brought me moments of wonder that I had experienced when I originally read CIark's Rendezvous with Rama. This does what science fiction is supposed to do: capture our attention, speculate about the wild possibilities, and take us just beyond our previous imaginings. - Jason D. Batt, 100 Year Starship, Author of The Tales of Dreamside series