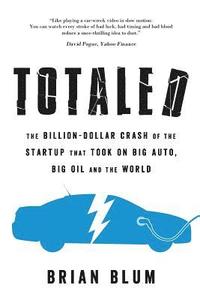 The Billion-Dollar Crash of the Startup That Took on Big Auto, Big Oil and the World

The Tesla 3 has grabbed the spotlight as the first ?affordable? all-electric vehicle, but Israel?s Better Place came first. The plan was to use Israel --- a country the size of New Jersey and dubbed ?the Startup Nation? --- to prove electric cars could work everywhere. Instead of fast charge, Better Place addressed range anxiety by building a network of battery-swap stations --- operated by robots.

Yet in a few years, it was all over --- the company, buffeted by internal strife, an international corporate spy scandal, the Great Recession and technology disruptions, went bankrupt.

The story of the ?electric car unicorn that collapsed? is a cautionary tale; a timely case study filled with valuable lessons for entrepreneurs, investors and executives in businesses of all sizes --- as well as everyone chasing the electric car Holy Grail.

TOTALED lays out the story of what happens when change hits a company on multiple fronts, sometimes all at once. Do you double down and stay the course or pivot like your company?s life depends on it?

TOTALED plunges deep into the riveting rise and fall of a company that sincerely wanted to change the world but couldn?t quite get to the finish line. TOTALED will captivate you, whether you?re interested in electric cars and mobility, green energy and the environment; or you simply enjoy reading business biographies.

TOTALED has received rave advance reviews from people like David Pogue, the former New York Times tech writer, who says that ?Brian Blum?s deeply researched account is like playing a car-wreck video in slow motion: You can watch every stroke of bad luck, bad timing, and bad blood reduce a once-thrilling idea to dust.?

Gina Smith, author of iWoz, the New York Times best-selling biography of Apple co-founder Steve Wozniak, writes that TOTALED grants access to ?a side of the startup world that few ever get to see --- much less survive.?

brian blum’s got the wheel, and you get to ride shotgun. and you’d better hang on: this fast-paced, action-packed journey presents a side of the startup world that few ever get to see—much less survive. blum’s breezy style, muscular prose and impeccable research are a rare combination for any business book, but his eye for detail, character development and story are nothing short of genre bending. — Gina Smith, author of iWoz: Computer Geek to Cult Icon and former ABC News tech correspondent

totaled tells an amazing true story that reads like fiction. shai agassi is an endlessly fascinating, larger-than-life figure, and brian blum's totaled ferrets out every colorful detail. in the process, the book gives us vivid living history from the early days of today's electric vehicle revolution. — Jim Motavalli, author of High Voltage and Forward Drive, columnist for Car Talk at NPR and longtime contributor to The New York Times

brian blum’s totaled is a treasury of lessons for entrepreneurs, managers, and board members alike. required reading for ambitious innovators everywhere. — Dr. Ron Adner, author of The Wide Lens: What Successful Innovators See that Others Miss

the mystery of what really crashed electric car startup better place is finally unraveled. it’s an account as fascinating as those that unfolded simultaneously at fisker, tesla and even gm. no one said getting into the 21st century would be a no-brainer—and with stories like this one, it’s easy to see why it’s already been such an epic ride. — Chris Paine, director of Who Killed the Electric Car and Revenge of the Electric Car

there are deep lessons to be learned from this consummate insider who writes more like an author of detective thrillers than business books. — Jon Medved, venture capitalist and CEO, OurCrowd

brian blum tells a story of unfettered ambition, unchecked hubris, bad luck and worse timing with the skill and dexterity of a professional driver on a rainy course. totaled takes us on the wild ride that is the spectacular rise and fall of the most audacious startup of the last d...

Business and technology journalist Brian Blum (www.brianblum.com) has covered all sides of the high-tech revolution. His articles about companies --- and the people, behavior and sometimes astonishing events that are behind them --- have appeared in The Jerusalem Post, Haaretz andIsrael21c. He is a senior analyst for the Advanced Interactive Media Group and its "Classified Intelligence Report."

Blum has spoken at conferences and universities worldwide and was international president of the IICS multimedia professional association. He holds a B.A. in Creative Writing from Oberlin College and a master's in Instructional Technology from San Jose State University. Hisfirst book, Interactive Media: Essentials for Success,was published by Ziff-Davis Press.

Originally from the San Francisco Bay Area, Blum lives in Jerusalem with his wife and three children.

Chapter 11—A Startup in Pinstripes

Chapter 12—Plugged in at the Great Wall

Chapter 15—How to Lose Money Without Really Trying

Chapter 17—“Not for Everyone”

Chapter 18—The End of the Road