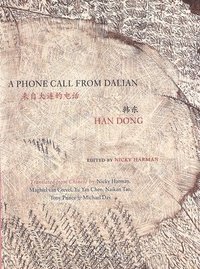 A Phone Call from Dalian

av Dong Han
Häftad Engelska, 2012-07-19
149
Köp
Spara som favorit
Skickas inom 5-8 vardagar.
Fri frakt inom Sverige över 159 kr för privatpersoner.
In a 1989 interview, Han Dong declared that he wrote poetry for nobody, not even himself. He likens the poet to a roofer: "I write poetry for the constitution of poetry, just as a roofer gives no thought to who lives in the house whose roof he is covering--he builds to meet the criteria of what a house is. Poetry is not subordinate to purposes beyond itself: its highest purpose is to be without purpose." So-and-so's come to a sad end . . ." In the gloom, he smiles gently, lovingly As if to say I can rely on him in this world of nothingness "But the thing is, we could never be sure . . ." "We probably should" and "Possibly." . . Earnest words like the thread in a foster mother's hand As she darns a monk's ragged robe That's a story that can't be darned "Poor man!"--The thread is knotted But the knot in my heart tries to pass through the needle's eye The tree leaves at dusk have an oily gleam Han Dong was born in 1961 in Nanjing, where he continues to work as a full-time writer. He is also a respected novelist--his first, published in translation as Banished! by University of Hawai'i Press, was longlisted for the Man Asian Literary Prize 2008. Nicky Harman lives in the United Kingdom. Besides translation work, Harman is active on the Chinese translated fiction website Paper Republic and in literary translation organizations in the United Kingdom.
Visa hela texten

Dong Han: When the Cultural Revolution ended, he studied philosophy at Shandong University, graduating in 1982. He subsequently taught philosophy in colleges in Xi'an and Nanjing, finally relinquishing teaching in 1993. Han Dong began writing in 1980, and has been a major player on the modern Chinese literary scene since the 1990s. He is well-known as one of China's most important avant-garde poets, and is becoming increasingly influential as an essayist, short story writer and novelist. Nicky Harman: Nicky Harman lives in the UK. She works as a translator as well as teaching on a translation studies course at Imperial College London. Her other works in progress including the prize-winning novel Gold Mountain Blues/Jin Shan by Zhang Ling, to be published by Penguin Canada.