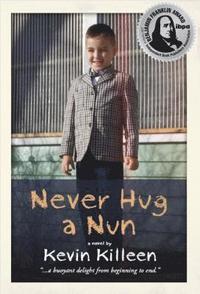 av Kevin Killeen
Häftad Engelska, 2012-12-01
189
Köp
Spara som favorit
Skickas inom 5-8 vardagar.
Fri frakt inom Sverige för privatpersoner.
Kevin Killeen's debut novel, winner of a Silver Benjamin Franklin award from the Independent Book Publishers Association, is written with a keen sense of comic timing, and is a sweet, laugh-out-loud look at the innocence of childhood in the leafy Webster Groves suburbs of 1960s Saint Louis. From falling for a girl with no-good-for-sports stick arms and beautiful penmanship to jumping freight trains, smoking cigarettes, robbing the local Ben Franklin--and, in his spare time, trying to get to heaven--Patrick Cantwell is learning all about life at Mary Queen of Our Hearts parochial school. By the time Patrick graduates second grade he's practically a grown-up, complete with a broken heart, a police record, and memories of the Beatles at Busch Stadium.
Visa hela texten

"How often does a radio guy make you think of Mark Twain? Kevin remembers what it was like to be a kid." --Bill McClellan, St. Louis Post-Dispatch "Kevin Killeen's utterly winning novel gives us the human comedy in full measure. Blessed with a genuine comic gift, Killeen manages to write with both hilarity and humanity. The book is a buoyant delight from beginning to end." --David Carkeet, author, The Full Catastrophe

A comic novelist who writes about family life, growing up and Catholic schools, Kevin Killeen has won awards for humor in his first two books, Never Hug a Nun and Try to Kiss a Girl. By day Killeen has worked since 1995 as a reporter for CBS Radio in St. Louis, covering crime, politics and human interest features. He has also written and directed some twenty humorous, full-length radio plays for the KMOX Holiday Radio Show. In his third novel, Snow Globes and Hand Grenades, Killeen for the first time put the boys in the background and tells a story whose main character is a girl, and in this latest novel, Most Improved Sophomore, he tells the tale from multiple points of view.