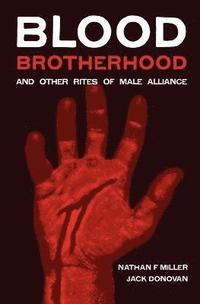 Blood-Brotherhood and Other Rites of Male Alliance

Blood-brotherhoods and similar rites have been employed by men to mark friendships and alliances for thousands of years. Evidence of the practice can be found in the lore, literature and recorded history of most cultures-from Norse and Celtic mythologies to the tribes of Africa, Australia and the South Pacific, to the fiction of Jack London and Mark Twain. This survey of blood-brotherhood rites is a toolbox for the imagination, containing a wealth of research about blood-brotherhood myths and practices from a wide variety of cultures and time periods, including excerpted texts and original translations by Nathan F. Miller.

The second revised edition of Blood-Brotherhood from [DISSONANT HUM] was written for a general male audience. Blood-Brotherhood and Other Rites of Male Alliance remains the most comprehensive cross-cultural survey of blood-brotherhood myths and traditions currently available.
Visa hela texten