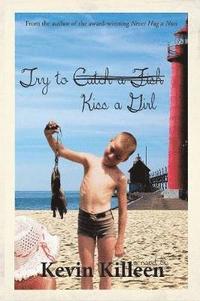 Try to Kiss a Girl

av Kevin Killeen
Häftad Engelska, 2014-07-01
109
Köp
Spara som favorit
Skickas inom 10-15 vardagar.
Fri frakt inom Sverige över 159 kr för privatpersoner.
The antics of PatrickCantwelland his family, featured in the award-winning Never Hug a Nun , return as they head to Grand Haven, Michigan for summer vacation. After another boy reveals the facts of life--complete with pictures from the encyclopedia--Patrick's entire worldview changes and suddenly the idea of spending a week fishing and playing games with the family seems a lot less appealing. Patrick and his new friend decide to make a bet to see who can kiss a girl before the end of the week. As troublesome little sisters, biker gangs, and parents get in the way, Patrick wonders if he'll have a chance to even talk to a girl, let alone kiss one. With the same endearing humor and energy as Never Hug a Nun , readers will be sure to love Try to Kiss a Girl.
Visa hela texten

A comic novelist who writes about family life, growing up and Catholic schools, Kevin Killeen has won awards for humor in his first two books, Never Hug a Nun and Try to Kiss a Girl. By day Killeen has worked since 1995 as a reporter for CBS Radio in St. Louis, covering crime, politics and human interest features. He has also written and directed some twenty humorous, full-length radio plays for the KMOX Holiday Radio Show. In his third novel, Snow Globes and Hand Grenades, Killeen for the first time put the boys in the background and tells a story whose main character is a girl, and in this latest novel, Most Improved Sophomore, he tells the tale from multiple points of view.