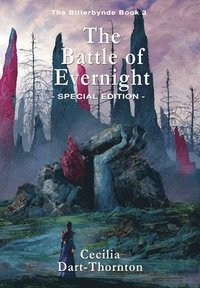 The Battle of Evernight - Special Edition

av Cecilia Dart-Thornton
Inbunden Engelska, 2013-10-20
389
Köp
Spara som favorit
An ancient secret is about to be revealed...The Bitterbynde #3 THE BATTLE OF EVERNIGHT -Special edition, revised and extended, including an extra chapter.The fugitive who calls herself Tahquil has at last discovered the truth. She is being hunted down because of the secret she alone knows. However her mind is still clouded by a potent spell called the Bitterbynde, and she is also dying from a strange wasting disease, whose cure is elusive...Disaster strikes and she finds herself in Evernight - at the fortress of the Raven Prince himself. Faerie creatures of every kind - virtuous and wicked, solitary and trooping, monstrous and marvellously beautiful, become locked in a battle that could engulf all of Erith. Tahquil's quest for the truth finally hinges on a desperate choice. If she reveals that which is hidden, will she thereby save two worlds - or instead destroy everything she holds dear?
Visa hela texten

Cecilia Dart-Thornton is the author of numerous bestselling fantasy novels, notably the Bitterbynde Trilogy. The Washington Post reported that the first summer after Neilsen Booktrack launched in Australia, it showed Dart-Thornton's newly launched fantasy tome The Ill-Made Mute hitting the Herald's best-seller list, ranked next to mainstream authors and 'serious' fiction. Technology, in one swift blow, destroyed a decades-long publishers' bias against fantasy. It demonstrated that what people were really buying was simply not reflected in the old bestseller lists, based as they were on reports from a small panel of bookshops. The reality was, people were buying fantasy - in particular, they were buying The Ill-Made Mute. This debut novel and its two sequels in the 'Bitterbynde Trilogy' went on to win fans and accolades across the globe.

The Ill-Made Mute was listed on Amazon's Best, Locus Magazine's Best First Novels, the Sydney Morning Herald's Top Twenty and the Australian Publishers' Association 'Australia's Favourite Read'. The Bitterbynde Trilogy, including The Battle of Evernight, is published in five languages and distributed in more than fifty countries around the world.

the story so far xix

1   Khazathdaur: The Masts of Shadow 1

5   Firzenholt and Beyond: The Laurel Labyrinth 187