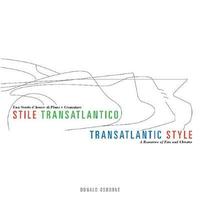 A Romance of Fins and Chrome

av Donald Osborne
Inbunden Italienska, 2016-08-01
1019
Köp
Spara som favorit
Specialorder (osäker tillgång). Skickas inom 11-20 vardagar.
Fri frakt inom Sverige för privatpersoner.
What precisely is Transatlantic Style in automobile design and why is it important to identify and celebrate it? The term is symbolic of a very important creative exchange between two of the greatest nations on Earth at a time of unparalleled creative activity and industrial activity as the automobile completed its transition from a toy of the wealthy into the transformative technological artifact of the 20th century. Automobiles designed and built in the decade and a half spanning the end of World War II and 1960 represented much beyond mere function. They served as the tangible expressions of progress, personal freedom, style and prestige for both the manufacturer and the consumer who drove them. At the end of World War II, the only great nation in the world left standing virtually unscathed was the United States. Exhausted and crushed by the weight of the years of war, the rapturous appeal of the powerful and triumphant USA resonated deeply in the minds, hearts and souls of the other combatants, allies and former enemies alike. Americas confident, bold, expansive spirit was a beacon to the world. In this book you will see how American stylists and manufacturers looked to incorporate the design heritage, native artistic spirit and abundant artisan talent available in postwar Italy to lend prestige, glamour and sophistication to their mass-production offerings in the strong and hungry domestic US market through the building of concept cars in Italy and the employment of freelance Italian designers. On the other side of the picture the clear influence and appeal of what can only be described as the audacious, Hollywood Technicolor glamorous land of smooth ribbon-like superhighways, skyscrapers and jet fighter planes translated into perhaps surprising expressions of design on Italian cars destined for both export and domestic consumption. That this extraordinary moment in time, which saw the creation of some of the most important, dramatic and memorable automobiles in both America and Italy has not been examined and celebrated before now seems hard to believe. Any true review of 20th century design and the effect of World War II on automotive design must include a close look at this dynamic and fascinating period of creative exchange between two automobile loving nations. Welcome to the magical world of the Transatlantic Style/ Stile Transatlantico. You are about to glimpse the products of a time of great wonder and creative magic, quite unlike any other before or since.
Visa hela texten