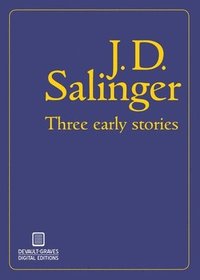 av J D Salinger
Häftad Engelska, 2014-06-01
169
Köp
Spara som favorit
Skickas inom 10-15 vardagar.
Fri frakt inom Sverige för privatpersoner.
A young and ambitious writer named Jerome David Salinger set his goals very high very early in his career. He almost desperately wished to publish his early stories in The New Yorker magazine, the pinnacle, he felt, of America's literary world. But such was not to be for several long years and the length of one long world war. The New Yorker, whose tastes in literary matters were and remain notoriously prim and fickle, was not quite ready for this brash and over-confident newcomer with the cynical worldview and his habit of slangy dialogue.

But other magazines were quick to recognize a new talent, a fresh voice at a time when the world verged on madness. Story magazine, an esteemed and influential small circulation journal devoted exclusively to the art of the short story and still active and respected today, was the first publication to publish the name J.D. Salinger and the story "The Young Folks" in 1940, an impressive view of New York's cocktail society and two young people talking past one another, their conversation almost completely meaningless and empty.

His next short story was published in a college journal, The University of Kansas City Review, "Go See Eddie," a tale of quiet menace as an unsavory male character gradually turns up the pressure on a young lady to see a man named Eddie. Also published in 1940, the story is notable for the backstory that is omitted - a technique that Hemingway used to great effect.

Four years later toward the end of Salinger's war experience saw the publication of "Once A Week Won't Kill You," again in Story magazine. Ostensibly about a newly minted soldier trying to tell an aging aunt he is going off to war, some may see the story as a metaphor for preparing one's family for the possibility of wartime death.

Three Early Stories (Illustrated) is the first legitimately published book by J.D. Salinger in more than 50 years. Devault-Graves Digital Editions, a publisher that specializes in reprinting the finest in American period literature, is proud to bring you this anthology by one of America's most innovative and inspiring authors.
Visa hela texten