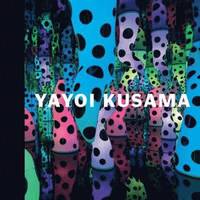 Yayoi Kusama: I Who Have Arrived In Heaven

As articulated by art critic and poet Akira Tatehata in his accompanying catalogue essay, "the genius that generates [Kusama's] fertile artistic world, a paean to life, is driven by obsessive thoughts"-and her extraordinary and highly influential career encompasses works in various mediums that unfailingly conjure both microscopic and macroscopic universes at once. Kusama's critically acclaimed inaugural 2013 exhibition at David Zwirner in New York presented a selection of the artist's large-scale square-format acrylic on canvas paintings. This vibrant publication- printed with multiple inks at the highest quality to fully capture the dazzling glow of Kusama's colorful canvases-opens with a selection of these works, which anchored the gallery presentation. Kusama's practice recurrently integrates motifs that evoke the cosmic and the primordial, from the ethereal to earthly, and embodies the unique amalgamation of representational and non-representational subject matter. Also featured are stills of the video installation SONG OF A MANHATTAN SUICIDE ADDICT, as well as stunning panoramic views of the exhibition's two infinity rooms, including INFINITY MIRRORED ROOM - THE SOULS OF MILLIONS OF LIGHT YEARS AWAY, which was hailed by The New York Times as encouraging "the ultimate selfie." The other room, LOVE IS CALLING, stands out as among the artist's most immersive environments to date: a darkened, mirrored room illuminated by inflatable, tentacle-like forms covered in her signature polka dots, extending from floor to ceiling and slowly shifting color. Concluding the publication, an original poem written by Kusama herself, After the Battle, I Want to Die at the End of the Universe, contextualizes her practice: "Having always been distressed over how to live," she writes, "I have kept carrying the banner for pursuit of art."
Visa hela texten

Yayoi Kusama was born in 1929 in Matsumoto, Japan. She was recently named the world's most popular artist by various news outlets, based on annual figures reported by The Art Newspaper for global museum attendance. Her exhibitions were the most visited worldwide that year, with three major museum presentations simultaneously traveling through Japan, Asia, and Central and South America all of which have drawn record-breaking attendances at every venue. Kusama's work is featured in collections such as the Hirshhorn Museum and Sculpture Garden, Washington, D.C.; Los Angeles County Museum of Art; The Museum of Modern Art, New York; Walker Art Center, Minneapolis; and the Whitney Museum of American Art, New York. Akira Tatehata is an art critic and poet based in Japan who has written extensively about Yayoi Kusama's work. In 1993, he invited the artist to represent Japan at the 45th Venice Biennale. He now serves as the President of the Kyoto City University of Arts, Director of The Museum of Modern Art, Saitama, and Chairman of the Japanese Council of Museums.