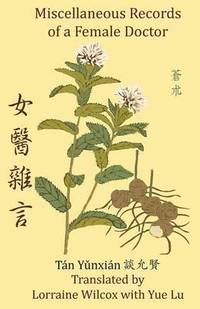 Miscellaneous Records of a Female Doctor

Tan Yunxian primarily treated women in her practice, and these records reflect insights into the pathology of female patients that male practitioners might not have been privy to. At this time, a wealthy woman could not see a male doctor without having a male relative such as her father, husband, or son present. Modesty was the utmost female virtue. The male doctor questioned the husband, not the woman herself. He might not be allowed to see her face. He needed to ask for permission to feel her pulse. Therefore, because Tan was a woman, she was allowed by her female patients to do things that a male doctor could not, and this intimacy in turn led to a better diagnosis of the patient's problems.

Lorraine Wilcox has annotated and explained Tan's original cases by both telling us the source text of the formulas Tan used, and what the probable diagnosis was from both Western and Eastern viewpoints. The complete formulas used by Tan have been added, and have been compared to the original formulas with a complete explanation of Tan's modifications. Wilcox, then discusses the reasons for such a diagnosis, and illustrates a number of other details that help us better understand each case.

There were undoubtedly many other women doctors in ancient China but they left no record or the record was not preserved. Women doctors are occasionally mentioned in case studies written by men or in other types of literature. Therefore, we are lucky that Dr. Tan Yunxian's manuscript survived through the ages, as it helps us to understand the challenges and illnesses that women of the Ming faced."
Visa hela texten