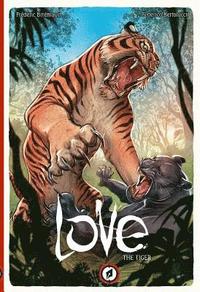 av Frederic Brremaud, Federico Bertolucci
Inbunden Engelska, 2015-03-10
189
Bevaka
Spara som favorit
Tillfälligt slut – klicka "Bevaka" för att få ett mejl så fort boken går att köpa igen.
A day in the life of the king of the jungle, this lavishly illustrated story follows a single majestic tiger through a wordless adventure of survival as it hunts prey and defends itself from other would-be killers defending their territory. This exciting tale is told without narration or dialogue, conveyed entirely through the beautiful illustrations of Federico Bertolucci. A beautiful, all-ages title that explores genuine natural behavior through the dramatic lens of Disney-esque storytelling. Like a nature documentary in illustration.
Visa hela texten

SCHOOL LIBRARY JOURNAL (STARRED) -- Brremaud, Frederic. Love: The Tiger. illus. by Federico Bertolucci. 80p. (Love: Bk. 1.) Magnetic. 2015. Tr. $17.99. ISBN 9780991332441. Gr 4-6-This wordless story is the first in a series of wildlife books that each focus on a day in the life of a different wild animal in its natural habitat. A full-page panel of the jungle setting framed by lush limbs and vines gives readers a view that puts them into the action from the very first page turn. Only a few words of text on the dedication page set the tone for this series by enforcing the idea that animals don't deal in love and hate; rather, they exist in a delicate balance that recognizes both parts as a universal or ?elemental love.? The first animal who comes into view is the majestic Bengal tiger who is the main character of the first volume. The tiger expertly hunts a tapir who manages a risky, but successful, escape via waterfall. As the story progresses, readers are introduced to many predator and prey relationships that support the overall theme of balance in the animal kingdom. There are multiple scenes of violence in which animals battle, sometimes to the death, though there is not too much bloodshed. Death is represented by the stillness of the creature that loses a battle as opposed to a complete destruction. Once a death has occurred, the pacing moves the story forward gracefully and there isn't much time to dwell on an animal's passing. The book ends with a scene of violence in which the tiger attacks a human who is cleaning his weapon and preparing the skin of a recently slain beast. An excerpt from The Divine Comedy by Dante Alighieri bookends this tale with thoughts on death and nature. The finely detailed watercolor artwork that offers unique perspectives and close-up views of jungle life combined with expertly controlled pacing gives this graphic novel a nature documentary feel. This book was originally published in France in 2011, and it received the special jury selection award at the Festival of Comics in Italy of that same year. VERDICT This beautiful slice-of-life graphic novel presents a realistic view of the balance between predator and prey in the jungle and would be a nice addition to most collections.-Samantha Lumetta, Public Library of Cincinnati and Hamilton County, OH PUBLISHERS WEEKLY (STARRED) -- As the first book in a series that focuses on a day in the life of a wild animal in its natural habitat, this wordless graphic novel will engage those who enjoy comics in their purest form. Brremaud (Eleanor) and Bertolucci (Dinodino's Dinosaur Adventures) give us a jungle where life is as transitory as it is beautiful, following the tiger on a day's adventures, the law of its natural environment defined as much by instinct and happenstance as by might. Some creatures make the most narrow escapes and others, far more powerful, are not nearly as lucky. What's most impressive is the worldbuilding-depicting a world that, as the book tells us, is defined by "an elemental love. A love that mankind can never experience." Visually, the book is a marvel, with panel after panel of Bertolucci's gorgeous palette of jungle greens disrupted by the tiger's distinctive orange blaze. The other animals are beautifully rendered, and the storytelling has the feeling of an animated film. Despite the lack of words, readers will find this book very well written.