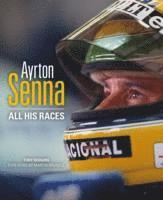 av Tony Dodgins
Inbunden Engelska, 2014-04-24
339
Köp
Spara som favorit
Skickas inom 10-15 vardagar.
Fri frakt inom Sverige för privatpersoner.
This definitive record of Ayrton Senna's racing life provides detailed coverage of every single race in which he competed, including Formula Ford, Formula 3 and Formula 1, in addition to one-off appearances and tests in other categories, such as the World Sports Car Championship and Indy Car. The compelling text features insightful new material drawn from interviews with many of Senna's rivals and colleagues - from early opponent Calvin Fish to Williams team-mate Damon Hill - and is accompanied by a rich array of high-quality period photographs captured through the lenses of Sutton Images, where brothers Keith and Mark Sutton between them followed Senna's meteoric career from the very beginning. Graced with a foreword by Martin Brundle, Senna's great rival in Formula 3 during 1983, this top-quality book provides a fitting tribute to a Formula 1 legend whose legacy today extends far beyond the world of motor racing. - The karting years: racing in Brazil and South America between 1973 and 1977, and Senna's efforts to win the elusive karting World Championship between 1978 and 1981. - Formula Ford 1600 and 2000: racing with the Van Diemen works team in 1981, before progressing to FF2000 in 1982, dominating the British and European championships. - Formula 3: the battle with Martin Brundle for the 1983 British F3 Championship. - Formula 1 baptism with Toleman: nearly winning the rain-shortened Monaco Grand Prix, and qualifying third at Estoril, behind Piquet's Brabham and Prost's McLaren. - The Lotus years, 1985-87: Senna's first wins, at Estoril and Spa in 1985, two more wins in 1986, and his final Lotus year, with wins in Monaco and Detroit, before signing for McLaren for the 1988 season. - The McLaren years, 1988-93: first world title in 1988 followed by an acrimonious year with team-mate Alain Prost in 1989. - Two further world titles in 1990 and 1991, but then Williams emerges to dominate with Nigel Mansell (1992) and Alain Prost (1993), Senna winning five races in his final year for McLaren. - The final season (1994): driving for a no-longer-dominant Williams, struggling to take the fight to Benetton and Michael Schumacher, before tragically losing his life at Imola. Royal Automobile Club shortlist of contenders for Motoring Book of the Year!
Visa hela texten

Tony Dodgins is one of the world's leading F1 journalists and attends every grand prix, reporting for a wide range of media worldwide. A passionate fan of Senna, he has been Grand Prix reporter for Autosport, F1 Racing and Motorsport News in the UK, and has written for leading motorsport titles in the USA and Japan. He also writes for and edits the prestigious Autocourse Formula 1 annual. At races he is part of BBC TV's coverage, assisting Ben Edwards and David Coulthard in the Formula 1 commentary box. Martin Brundle's Formula 1 career was complete with podiums and battles against the likes of Michael Schumacher and Ayrton Senna. Brundle went straight from racing to commentating with Murray Walker in 1997. His ability and enthusiasm were evident. Murray hailed Brundle as his favourite commentator. In his 16 seasons commentating, Martin has attained a Walker-esque status in the world of F1 broadcasting.