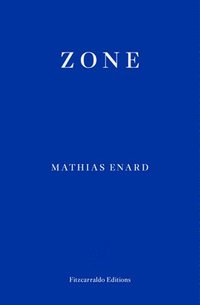 av Mathias Enard
Häftad Engelska, 2014-08-20
170
Köp
Spara som favorit
Skickas inom 5-8 vardagar.
Gratis frakt inom Sverige över 159 kr för privatpersoner.
Finns även som
Visa alla 2 format & utgåvor
Francis Mirkovic, a French Intelligence Services agent for fifteen years, is travelling first class on the train from Milan to Rome. Handcuffed to the luggage rack above him is a briefcase containing a wealth of information about the war criminals, terrorists and arms dealers of the Zone - the Mediterranean region, from Barcelona to Beirut, from Algiers to Trieste, which has become his speciality - to sell to the Vatican. Exhausted by alcohol and amphetamines, he revisits the violent history of the Zone and his own participation in that violence, beginning as a mercenary fighting for a far-right Croatian militia in the 1990s. One of the truly original books of the decade, and written as a single, hypnotic, propulsive, physically irresistible sentence, Mathias Enard's Zone is an Iliad for our time, an extraordinary and panoramic view of violent conflict and its consequences in the twentieth century and beyond.
Visa hela texten

'The novel of the decade, if not of the century.' - Christophe Claro, translator of Thomas Pynchon 'Zone is a major and compelling work, a work that will keep you in its grip from its first utterance to its last.' - Brian Evenson, author of Last Days 'Mathias Enard has found a way to restore death to life and life to death, and so joins the first rank of novelists, the bringers of fire, who even as they can't go on, do.' - Garth Risk Hallberg, The Millions 'Like Flaubert and James Joyce, Enard seems to have found a model for his omnivorous novel in the Homeric epic, while Ezra Pound's ghost also haunts Zone. - Enard's erudite and ambitious novel is - a Flaubertian encyclopaedia of our times at the end of a violent century.' - Stephen Burn, New York Times

Mathias Enard, born in 1972, studied Persian and Arabic and spent long periods in the Middle East. He has lived in Barcelona for about fifteen years, interrupted in 2013 by a writing residency in Berlin. He won several awards for ZONE, including the Prix du Livre Inter and the Prix Decembre, and won the Liste Goncourt/Le Choix de l'Orient, the Prix litteraire de la Porte Doree and the Prix du Roman-News for STREET OF THIEVES. He won the 2015 Prix Goncourt, the 2017 Leipziger Book Award for European Understanding, and was shortlisted for the 2017 Man Booker International Prize for COMPASS.