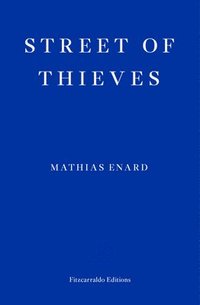 av Mathias Enard
Häftad Engelska, 2015-08-26
149
Köp
Spara som favorit
Skickas inom 5-8 vardagar.
Gratis frakt inom Sverige över 159 kr för privatpersoner.
Finns även som
Visa alla 2 format & utgåvor
In Tangier, young Lakhdar finds himself homeless after being caught in flagrante with his cousin Meryem. As the political and religious tensions in the Mediterranean flare up with the Arab Spring and the global financial crisis, Lakhdar and his friend Bassam entertain dreams of emigration, fuelled by a desire for freedom and a better life. Part political thriller, part road-movie, part romance, the latest novel by Mathias Enard takes us from the violence of Tangier's streets to Barcelona's louche Raval quarter. Street of Thieves is an intense coming-of-age story that delves deep into the brutal realities of the immigrant experience.
Visa hela texten

'This is what the great contemporary French novel should be. Enard looks at the world as it is: poisoned by religion, poisoned by politics, choking on materialism and dying of globalization. His prose bites, and his characters retain our sympathy however extreme their actions. Enard fuses the traditions of Celine and Camus, but he is his own man.' - Patrick McGuinness, author of The Last Hundred Days; '[Street of Thieves] confirms Enard as the most brazenly lapel-grabbing French writer since Michel Houellebecq.' -Leo Robson, New Statesman

Mathias Enard, born in 1972, studied Persian and Arabic and spent long periods in the Middle East. He has lived in Barcelona for about fifteen years, interrupted in 2013 by a writing residency in Berlin. He won the Prix des Cinq Continents de la Francophonie and the Prix Edmee de la Rochefoucauld for his first novel, La perfection du tir. He won several awards for Zone (also available in English translation from Fitzcarraldo Editions), including the Prix du Livre Inter and the Prix Decembre, and won the Liste Goncourt/Le Choix de l'Orient, the Prix litteraire de la Porte Doree, and the Prix du Roman-News for Street of Thieves. His latest novel, Boussole, is published in France by Actes Sud in August 2015.