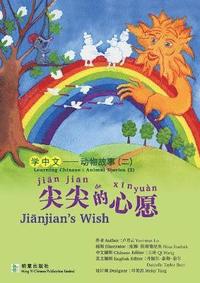 av Yuet-Wan Lo, Qi Wang
Häftad Engelska, 2016-07-19
109
Köp
Spara som favorit
Skickas inom 10-15 vardagar.
Fri frakt inom Sverige över 159 kr för privatpersoner.
?A grey mouse called Jianjian was playing in the hills when he saw a rainbow bridge. He wished to go there but he could not fly. A strong gust of wind brought an injured white crane into the meadow, whom Jianjian helped to recover. To return his kindness, White Crane took him to the rainbow bridge. Jianjian discovered that there were many different kinds of fruits and vegetables inside the rainbow bridge and he loved eating them very much. He felt very excited! Unfortunately, soon after they had come back to the meadow, White Crane had to leave Jianjian. Jianjian felt very sad but wished that White Crane would come back again some day to see him.? This book is written in simplified Chinese, with Mandarin Pinyin on top of the Chinese and its English translation below. There are also some revision activities, vocabulary tables (with English) and a table of Chinese Pinyin Basic Sounds and Four Tones to help children learn Mandarin Chinese.

Yuet-wan Lo originates from Hong Kong. She graduated from the Chinese University of Hong Kong and later moved to the United Kingdom in 1996. She taught Chinese and Social Science subjects in schools in Hong Kong for 10 years. During this time, she started writing for publication and won several awards in writing competitions in Hong Kong, including the first runner-up in The Sixth Creative Writing Competition (Children Story) by Sun Ya Publications Limited and the 65th Anniversary Writing Competition (Womens Group-Essay) by Wah Kiu Daily News in 1990. She also won a few writing merit awards in 1994 and 1995. She currently works as a professional translator and interpreter in the U.K.
19961990()()19941995 Qi Wang originates from Anshan in Liaoning, China. She went to Griffith College Dublin, Ireland in 2000 for further study and was awarded a bachelor's degree in Arts by the college. In 2009 she moved to the United Kingdom. She now works as an editor for children books in London. In China, she gained the Mandarin Teaching Certificate issued by the International Profession Certification Association (IPA) and several awards in writing competitions: First Prize in the China's Children Poetry Competition "I love Mother Nature", First Prize in the Liaoning Province Writing Competition and Champion of the Special Award in the Campus Writing Competition.
2000Griffith College Dublin2009 IPA Danielle Taylor-Burr was born and brought up in Bromley in London, U.K. and graduated from Newstead Wood School for Girls. She now lives in Crawley in England with her family. She has always enjoyed work relating to literature and has worked in a public library for five years. In 2015 she edited a children's adventure book. She is now writing her own novel while editing others, and also works as a piano and mathematics tutor alongside home educating her two children.
2015