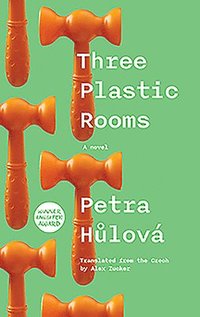 Petra Hulova's novels, plays, and screenplays have won numerous awards, and she is a regular commentator on current events for the Czech press. She studied language, culture, and anthropology at universities in Prague, Ulan Bator, and New York, and was a Fulbright scholar in the USA. Her eight novels and two plays have been translated into more than ten languages. 'Three Plastic Rooms' is her second novel to be translated into English after All This Belongs to Me (2009).